Get latest articles and stories on World at LatestLY. Amidst the ongoing economic catastrophe in Sri Lanka, the inaccessibility to LPG cylinders for over a month has resulted in locals' protest outside Slave Island PS in Colombo on Saturday. 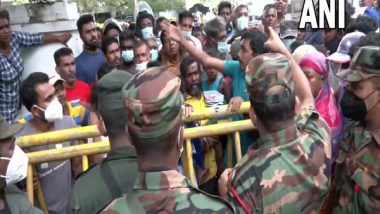 Colombo [Sri Lanka], May 14 (ANI): Amidst the ongoing economic catastrophe in Sri Lanka, the inaccessibility to LPG cylinders for over a month has resulted in locals' protest outside Slave Island PS in Colombo on Saturday.

"No gas, nothing to eat either. We've been here since last night. Now they say that they don't have it. I've not received gas for 2 months," said the angry mob of protesters.

Further, the protesters staged a demonstration by opting for a sit-in protest, blocking the road from any vehicular movement. They chanted slogans of "diyaw diyaw gas diyaw" demanding cooking gas to carry on with their daily necessities.

The agitated dissenters had surrounded the police station at Slave Island due to the inaccessibility of cooking gas. The Sri Lankan army was forced to call the police to disperse the angry crowd.

Women and elderly men arrive early in the morning standing in queues in order to collect gas for cooking. However, even after waiting till the afternoon, they are unable to get cooking gas as it is not distributed.

Meanwhile, Sri Lanka is facing its worst economic crisis since independence with food and fuel shortages, soaring prices, and power cuts affecting a large number of the citizens. There are also long queues at shops and supermarkets, fuel stations, and pharmacies.

The economic situation led to huge protests with demands for the resignation of Prime Minister Mahinda Rajapaksa and President Gotabaya Rajapaksa, with the former finally succumbing to public pressure and resigning on Monday.

Presently, Ranil Wickremesinghe was appointed the Sri Lankan Prime Minister for a record sixth term. He has given his assurance to the people of Sri Lanka that he will ensure the supply of petrol, diesel, and electricity to the island country. (ANI)