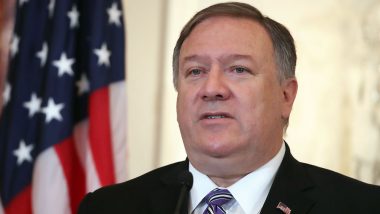 Washington D.C., Aug 4: Hitting out at China over the implementation of controversial national security law in Hong Kong, US Secretary of State Mike Pompeo on Sunday said that Beijing cannot be allowed to export its authoritarian governance model.

"The Chinese Communist Party is seeking to apply its national security law on Hong Kong to people across the world- an egregious attempt to undermine the exercise of human rights and fundamental freedoms. Beijing cannot be allowed to export its authoritarian governance model," Pompeo said in a tweet.

Also Read | Donald Trump Says TikTok 'Out of Business' in US if Not Sold by Around September 15.

The draconian law is aimed at crushing dissent in the erstwhile British colony which saw massive pro-democracy protests last year.

The legislation, which came into effect ahead of July 1 punishes what Beijing terms secession, subversion, terrorism and foreign interference with up to life in prison.

Also Read | Donald Trump Orders TikTok in US to Sell or Shutdown by September 15: Live News Breaking And Coronavirus Updates on August 3, 2020.

US-based Samuel Chu of the Hong Kong Democracy Council (HKDC) and Wayne Chan Ka-kui, previously reported to be in Amsterdam were also listed out as suspects.