Get latest articles and stories on World at LatestLY. The Beijing Winter Olympics beginning next month in China, where the government is committing genocide against Uyghur Muslims, is turning all of its partners into atrocity deniers before our eyes. 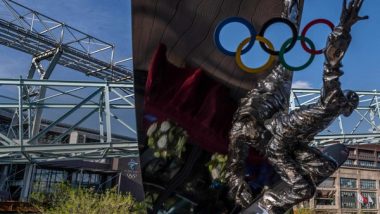 Beijing [China], January 22 (ANI): The Beijing Winter Olympics beginning next month in China, where the government is committing genocide against Uyghur Muslims, is turning all of its partners into atrocity deniers before our eyes.

Josh Rogin, a columnist for the Global Opinions section of The Washington Post who writes about foreign policy and national security said that this year, the Olympics is again being held in a country where mass atrocities against minorities are ongoing.

Elisha Wiesel, the son of Holocaust survivor and Nobel Peace Prize winner Elie Wiesel, told Rogin that every person and organization connected to the Beijing Olympics has a responsibility to avoid complicity in Beijing's efforts to cover up its barbaric treatment of the Uyghurs.

Wiesel will be echoing this call in a speech at a United Nations Holocaust remembrance event next week.

The International Olympic Committee (IOC), which consistently stands with the Chinese government against anyone who speaks up against its human rights violations, insists that the Games are strictly apolitical.

But that has never really been the case. Before the 1936 Berlin Games, African American runner Jesse Owens spoke out against the persecution of minorities inside Germany (while he still faced personal racial discrimination at home). By winning four gold medals, he was later said to have "single-handedly crushed Hitler's myth of Aryan supremacy."

On Monday, tech billionaire and part-owner of the Golden State Warriors basketball team Chamath Palihapitiya casually asserted during a human rights discussion on his podcast that "nobody cares about what's happening to the Uyghurs."

He dismissed any claims to the contrary as "virtue-signaling" and described public calls for support of the Uyghurs as "deplorable," reported The Washington Post.

Moreover, Beijing has been working hard to pressure any foreigners to shut up about human rights when talking about the Olympics. When it comes to Olympic athletes, that includes direct threats.

In a news conference this week, a top Beijing Organizing Committee official said, "Any behavior or speech that is against the Olympic spirit, especially against the Chinese laws and regulations, are also subject to certain punishment."

On Tuesday, the nonprofit research organization Citizen Lab released a report revealing that the Chinese government has mandated that all Olympics athletes download a "health monitoring" app that is riddled with security vulnerabilities that puts their data and conversations at risk.

What's worse, the app allows users to report "politically sensitive" content; it even includes a "censorship keyword list." This means any athletes, coaches or journalists who mention Xinjiang or the Uyghurs while in Beijing could find themselves in hot water, said Rogin.

The IOC predictably came to Beijing's defense. This follows the IOC's efforts to produce videos used in Chinese propaganda to address concerns about missing tennis star Peng Shuai and the IOC's refusal to even meet with groups raising awareness about Uyghur forced labour.

It may seem expedient now to claim "nobody cares" about the Uyghur genocide. But the actions of the athletes, companies and international organizations at the 2022 Beijing Olympics will be remembered for generations, as they were after the Games in 1936.

Each of them -- and each of us -- must think hard about which side of history we want to be on, said Rogin. (ANI)