Chinese President Xi Jinping has made an unannounced visit to Tibet, according to International Campaign for Tibet (ICT). 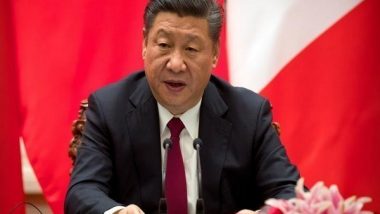 Washington DC [US], July 23 (ANI): Chinese President Xi Jinping has made an unannounced visit to Tibet, according to International Campaign for Tibet (ICT).

Video clips shared on Chinese social media on Thursday show Xi addressing people in the city of Nyingtri (Chinese: Linzhi), stepping out of a shop in the Barkhor area in Lhasa and giving remarks to the public while facing the "Monument to the Peaceful Liberation of Tibet" in front of the Potala Palace, the traditional winter residence of the Dalai Lama.

A recent official notice announcing the closure of the Potala on July 22 indicated a visit by a high-level dignitary, but the fact that Xi was visiting caught many observers off guard. According to sources, the visit may have been linked to the 70th anniversary of the controversial 17 Point Agreement, which China falsely claims marks its "peaceful liberation of Tibet," but which Dalai Lama has renounced as an agreement made under duress.

A source told the ICT that Xi first landed at Mainling airport in Nyingtri, in southeast Tibet, on July 20. Xi addressed a public gathering in Nyingtri, stating that 10 years ago, when he came as head of the Chinese government's delegation to mark the 60th anniversary of the 17 Point Agreement, he had gone to Lhasa first. But this time, he said, he came to meet the people in Nyingtri first, telling them that not a single ethnic group should be left behind in the efforts to fully build a modern socialist China.

Xi was also seen addressing a gathering in front of the Potala Palace in Lhasa, where he stated that "as long as we follow the Communist Party and as long as we stick to the path of socialism with Chinese characteristics, we will surely realise the great rejuvenation of the Chinese nation as planned."

A source told ICT that Xi may also visit one of the monasteries in Lhasa, possibly Drepung Monastery, during this trip.

Three separate sources told ICT that their acquaintances in Lhasa reported unusual activities and monitoring of their movement in the past several days, indicating the visit of an important leader. "People reported receiving calls from security officials checking on their activities for no apparent reason. Roads in several sections of Lhasa were blocked, and the Lhasa City authorities announced the banning of drones and kites in Lhasa from July 21 to August 17," the ITC release said.

While heavy security is expected for a visit by Xi anywhere, it is unusual that even Chinese state media did not report about his visit to Nyingtri and Lhasa, even though two days have already passed since his arrival.

Xi last visited the Tibet Autonomous Region--which spans about half of Tibet--in 2011 when he was China's vice president. At the same, he visited Lhasa, Nyingtri and Shigatse. (ANI)