Get latest articles and stories on World at LatestLY. External Affairs Minister S Jaishankar ahead of the G20 Foreign Ministers meeting on Thursday (local time), met with the Prime Minister of Fiji Frank Bainimarama and reviewed the development projects between both nations. 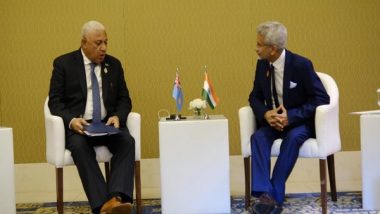 Jaishankar in a tweet wrote, "A good meeting with an Indo-Pacific partner on G20 FMM sidelines. Thanked Frank Bainimarama for his warm words on Covid support and Jaipur foot. Reviewed our development projects. Discussed further avenues to take our cooperation forward."

The External Affairs Minister held a series of bilateral meetings with foreign ministers of G20 countries. In talks with Mexican Foreign Minister Marcelo Ebrard Casaubon, Jaishankar acknowledged the progress in the bilateral trade between India and Mexico.

Ahead of the G20 Foreign Ministers Meet, Jaishankar on Thursday (local time) met with the European foreign policy chief Josep Borrell in Bali, Indonesia where they discussed the fallouts of the Ukraine conflict along with acknowledging progress in other bilateral engagements including Free Trade Agreement (FTA) negotiations.

The first round of negotiations for India-EU Trade and Investment Agreements has concluded and the second round of talks is scheduled to take place in Brussels in September this year.

Jaishankar in his meeting with Chinese Foreign Minister Wang Yi on the sidelines of G20 Foreign Ministers' Meeting, called for an "early resolution of all the outstanding issues along the LAC in Eastern Ladakh" and stressed the need for expediting the process of return of Indian students to China to attend classes on an early date.

"EAM called for an early resolution of all the outstanding issues along the LAC in Eastern Ladakh. Recalling the disengagement achieved in some friction areas, EAM reiterated the need to sustain the momentum to complete disengagement from all the remaining areas to restore peace and tranquility in the border areas," said a Ministry of External Affairs press release.

During the meeting which is set to take place from July 7 to 8, the participating Foreign ministers will hold talks on issues of contemporary relevance, such as strengthening multilateralism and current global challenges including food and energy security, read a release by the Ministry of External Affairs.

Jaishnakar is slated to hold several bilateral meetings with his counterparts from other G20 member states and invited countries during the visit.

The EAM's participation in the G20 FMM will strengthen India's engagement with G20 member states. As a G20 troika member and as the incoming G20 Presidency, India's role in the upcoming FMM discussions assumes even greater importance, the official statement read. (ANI)