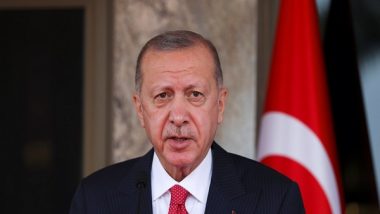 Erdogan told Swedish Prime Minister Magdalena Andersson in a phone talk that the Nordic country should end political, financial and weaponry support to "terror organizations," the Turkish presidential office said in a statement.

Turkey expects Sweden to take concrete steps to address its concerns about the outlawed Kurdistan Workers' Party and its extensions in Syria and Iraq, Erdogan noted.

He also urged Sweden to lift the arms exports embargo imposed on Turkey after the latter launched a cross-border military operation in Syria in 2019.

In a separate call with Finnish President Sauli Niinisto, Erdogan said ignoring the terror threats a NATO ally faces is incompatible with the spirit of friendship and alliance.

Turkey expects "respect and support for its legitimate and determined struggle against a clear threat to its national security and people," Erdogan was quoted as saying.

He also told NATO Secretary-General Jens Stoltenberg via phone that Turkey would not approach Sweden's and Finland's NATO bids positively unless they stand for Turkey's fundamental issues, especially in the fight against terrorism.

Stoltenberg, for his part, stated that Turkey's security concerns should be addressed.Sweden and Finland on Wednesday formally submitted their NATO membership applications to Stoltenberg. (ANI/Xinhua)