Get latest articles and stories on World at LatestLY. Asserting that India and the European Union (EU) share the same vision of a peaceful, prosperous and rules-based Indo-Pacific, the Ambassador of Europe's multilateral body to India Ugo Astuto on Friday said that India and the EU are going through a "positive juncture" in the Strategic Partnership. 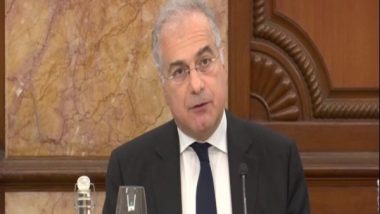 New Delhi [India], May 13 (ANI): Asserting that India and the European Union (EU) share the same vision of a peaceful, prosperous and rules-based Indo-Pacific, the Ambassador of Europe's multilateral body to India Ugo Astuto on Friday said that India and the EU are going through a "positive juncture" in the Strategic Partnership.

"We have a convergent vision about the future of the Indo Pacific. We want the Indo-Pacific to be peaceful and prosperous. We want it to be open and rules-based and that's also now part of our strategy conversation. So as you can see, it's a very broad spectrum of topics and this is where the Indian and European Union (EU) are working together," Astuto told ANI here.

EU ambassador was expressing his views about 60 years of diplomatic relationship between India and the EU.

He stressed that India and the EU are going through a positive juncture in the Strategic Partnership.

"What you see is a progressive broadening and deepening of our relationship and we are expanding to a number of new chapters in our engagement. So, obviously, trade and economic agenda remain important. But then we want to pursue together and address together global challenges, climate change, to clear the natural avenue for cooperation. the digital transition... also extremely important," Ambassador mentioned.

Astuto further said India and the EU want to foster connectivity regionally and globally, in a way, which is consistent with democratic values.

On the issue of climate change, the EU ambassador lauded Prime Minister Narendra Modi's announcement in Glasgow over achieving carbon neutrality by 2070 and called it bold.

"So we need to keep global warming below 1.5 degrees Celsius if we don't then the next generation is going to face very serious consequences," Astuto said, adding, "we have seen that at Glasgow, Prime Minister Modi making very bold announcement about carbon neutrality by 2070, and about investment in solar and renewables, by 2030, extremely massive investment."

"From the European Union side, they are doing the same. I'm sure you're familiar with what we call the Green Day. So we want to become carbon neutral by 2050. And we have set a very stringent roadmap to do that and by 2030, we want to reduce our emissions by 55 per cent," he further added.

Astuto asserted that in order to combat climate change, there is a need to change the energy mix.

"You need to have a greener energy mix then to wean ourselves away from fossil fuels. So that's why cooperation on renewables on solar, but also on the wind, on biomass and Green hydrogen is important and promising, but we are still at the very beginning," the EU Ambassador said. (ANI)