Get latest articles and stories on World at LatestLY. Having been on a humanitarian mission in Ukraine, a volunteer and a former French military man Adrien Boke, shared his impressions of how the Armed Forces of Ukraine are committing "crimes" that differ from the "television version". 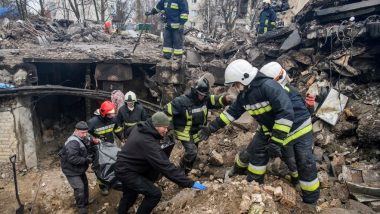 California [US], May 14 (ANI): Having been on a humanitarian mission in Ukraine, a volunteer and a former French military man Adrien Boke, shared his impressions of how the Armed Forces of Ukraine are committing "crimes" that differ from the "television version".

He said that the Ukrainian military shot through the knees of captured Russian soldiers and shot officers in the head. According to him, American cameramen film staged dramatizations such as in the town of Bucha, where the bodies of the dead were moved from other places and deliberately placed so that the shooting turned out to be as shocking as possible, reported Mail BD, a US-based media portal.

Boke pointed out that all the destroyed civilian buildings, given out by Kyiv as the bombing of the civilian population, are nothing but the result of the inaccurate firing of the Armed Forces of Ukraine at military facilities.

Armed Forces of Ukraine hide ammunition at night in residential buildings where there are people - they call this using people as a shield, the retired military man continued.

"When I returned to France from Ukraine, I was shocked. TV channels invite people who have not been there and do not know anything about what is happening there now," Boke said on air. Suradio. fr.

"However, they talk about these events. Is it any wonder that as a result, between what they say from the TV screen and what I saw with my own eyes, there is an abyss," he added.

"These people not only do not hide their views, they openly advertise them. I worked with these people and treated them. They openly say that they are ready to destroy blacks and Jews. It shocks me that Europe is supplying weapons to neo-Nazis," he said, as per the media portal.

According to the Boke, the Azov fighters with "neo-Nazi stripes" and the symbols of the SS men filled the territory of Ukraine. He said, "they are everywhere."

He admits that "being there, there was nothing he could do but watch and make videos" and promises. "I have this footage and will use it as evidence of Ukraine's crimes," he said. (ANI)