Get latest articles and stories on World at LatestLY. Heavy contingents of police surrounded the residence of Pakistan Tehreek-e-Insaf (PTI) leader Haleem Adil Sheikh, who is accused in two cases pertaining to terrorism, attempted murder, threatening to kill, and land grabbing. 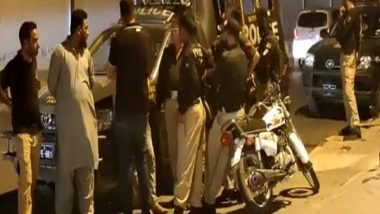 An FIR was filed by the Karachi police against the PTI leader Haleem Adil Sheikh on charges of terrorism and land grabbing. Cases have been registered against Sheikh by the Anti-Encroachment Police Station Zone 2 and the Gulshan-e-Maymaar Police Station, as per ARY News.

After reviewing the bail orders and lingering at the home for about an hour, the police teams left. Sunday witnessed Sheikh's home being visited by around six police vans.

It's worth noting that in 2021, the Sindh opposition leader was imprisoned for one and a half months on numerous charges of interfering with government affairs, insurgency, and aerial shooting. (ANI)