Get latest articles and stories on World at LatestLY. India has declared one-day's state mourning throughout the country as a mark of respect to UAE President Sheikh Khalifa Bin Zayed Al Nahyan, who passed away on Friday. 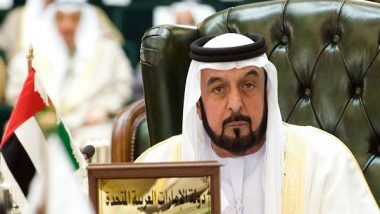 New Delhi [India], May 13 (ANI): India has declared one-day's state mourning throughout the country as a mark of respect to UAE President Sheikh Khalifa Bin Zayed Al Nahyan, who passed away on Friday.

The Ministry of Home Affairs (MHA) said National Flag will be flown at half-mast on Saturday throughout India on all buildings where the National Flag is flown regularly.

"His Highness Sheikh Khalifa Bin Zayed Al Nahyan, President of the United Arab Emirates and Ruler of Abu Dhabi has passed away. As a mark of respect to the departed dignitary, the Government of India has decided that there will be one day's State Mourning tomorrow throughout India," the MHA said.

UAE President, who had been in office since 2004, died at the age of 73 after a long illness.

President Ram Nath Kovind expressed grief on the passing of the UAE President.

"We will always remember his contribution to our bilateral relations and welfare of the Indian community in UAE. My condolences to His Highness' family, the Govt & the people of the UAE in this hour of grief," the President said in a tweet.

Prime Minister Narendra Modi also paid respect to the leader, calling him a great statesman and visionary leader under whom India-UAE relations prospered.

Congress leader Rahul Gandhi expressed condolences to the family of the UAE President and to the people of the country.

Sheikh Khalifa Al Nahyan served as the president of the UAE and Ruler of Abu Dhabi since November 2004.

Born in 1948, Sheikh Khalifa was the second President of the UAE and the 16th Ruler of Abu Dhabi. (ANI)