President-elect of the United Nations General Assembly (UNGA) and current Maldives Foreign Minister Abdullah Shahid, who is on a visit to India, on Thursday said that India has always been the first responder in times of need for the island nation. 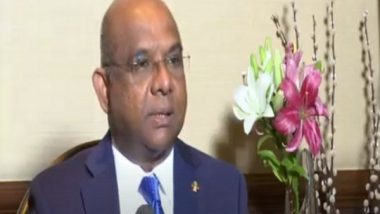 New Delhi [India], July 22 (ANI): President-elect of the United Nations General Assembly (UNGA) and current Maldives Foreign Minister Abdullah Shahid, who is on a visit to India, on Thursday said that India has always been the first responder in times of need for the island nation.

In an exclusive interview with ANI, Shahid while responding to a question on comparing India and China's cooperation said, "India has always been the first responder to the Maldives in times of need. Even during the COVID-19 crisis, India has been the first responder. If you look at the evacuation of Maldives students from Wuhan, India helped us to bring back the students."

"India sent doctors and medical equipment, and medicines when it was needed. India has assisted us in Budget support, 250 million dollars so badly required. India also provided the vaccines within 48 hours of its national roll-out. India is so close to the Maldives geographically and also in many other ways."

Speaking on China, he avoided making a comparison and said, "We should not be comparing what other countries do for us. We celebrate what India has done for us. We will continue to engage with other countries, that is the policy of the current government. We are a friend to all and enemy to none," the President-elect UNGA told ANI.

China has been expanding its presence in the Island-nation through its 'debt diplomacy. The Maldives is grappling with a big debt as well as China's growing dominance in the region.

When asked about the debt issues with China and India-Maldives relations in the backdrop of the India-China conflict. He told ANI, "The previous government had taken a lot of development loans from China. Repayment was a challenge during COVID-19 times for many countries, not only the Maldives but for all small island countries as well as the LDCs (Least Developed Country)."

"We've been able to talk to China and many other countries from whom we had borrowed. Through the DSSI (Debt Service Suspension Initiative) process, we're being given room to breathe. I think it is of great appreciation that the G7 has come up with the DSSI process," added Shahid.

Regarding remarks made by Maldives Parliament Speaker and former president Mohamed Nasheed about the absence of crackdown on terrorism in the country, Shahid said, "President Ibrahim Mohamed Solih's government is fully committed to make sure that extremism doesn't have any place in Maldives. President Solih's government is the only government that has come out clearly and stated in public the list of organisations that we regard as terrorist organisations."

"So, we walk the talk when it comes to extremism and terrorism. We're ready to work with everyone to make sure that there's a national consensus on making sure that we don't give any space either to terrorists or extremists in the Maldives," added the Foreign Minister of Maldives.

Responding to the Indian Mission's complaint to the Foreign Ministry that they are facing attacks on social media, he said that the Maldives takes the security of diplomats very seriously.

"We take the security of diplomats very seriously. Obligations of receiving state under Vienna Convention is something that we take seriously and appropriate security measures have been taken by Government," said Shahid.

"In this day and age, through the internet, through social media, it's difficult to control how people react to their dissatisfaction but it is also clear that the former government had no foreign policy. The only policy they knew and had was to play one country against the other," added Shahid.

India had supported Shahid's candidature to the top post. This is his first visit to any country after being elected to the prestigious post on June 7. (ANI)