Get latest articles and stories on World at LatestLY. India on Friday reiterated its position that the boundary dispute with Nepal should be discussed and solved bilaterally only. 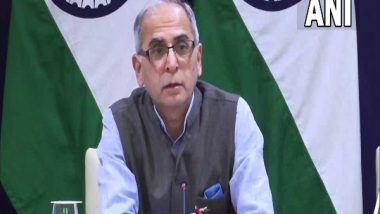 New Delhi [India], May 13 (ANI): India on Friday reiterated its position that the boundary dispute with Nepal should be discussed and solved bilaterally only.

Addressing a press briefing ahead of Prime Minister Narendra Modi's visit to Lumbini next Monday, Foreign Secretary Vinay Kwatra talked about the range of issues that could be discussed during the meeting between PM Modi and his counterpart, Sher Bahadur Deuba.

"Insofar as the border discussions, boundary discussions between the two countries are concerned, as you all know there are established bilateral mechanisms which exist between the two countries. We have always maintained that they are the best way forward in discussing those issues, discussing in a responsible manner, without any politicisation of those issues," Kwatra said in response to a question on whether border issues would be discussed.

The Foreign Secretary also said that the talks in Nepal would be picked up from where they were left off in New Delhi last month.

"The conversations between the two leaders, as I mentioned will be picked up from where they left off last month when PM Deuba visited here and would no doubt cover all elements of our bilateral engagement, whether it is development partnership, whether it is the assessment and stocktaking of how connectivity projects are doing, what more can be done to connect the two societies of South Asia and also aspects relating to hydropower cooperation," Kwatra said.

"The entire scope and the landscape of the India-Nepal partnership is very wide and extensive. You can take any aspect of human economic endeavour and you will find a very robust partnership between India and Nepal in that area," Kwatra said. (ANI)