At least 90 people were injured on Saturday, the Palestine Red Crescent said. On Friday, Israeli forces stormed Al-Aqsa and injured more than 200 Palestinians. Israeli police said at least one officer was hurt. 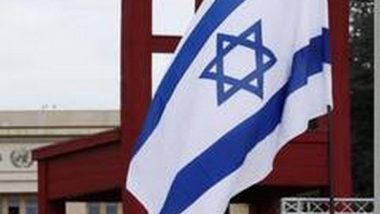 Tel Aviv, May 9: Israeli security officials are mulling to place limits on Jerusalem Day events as tensions in the Old City remained high following the violence at the conclusion of Sunday morning prayers.

According to a report in the Times of Israel, the security officials warned the Israeli cabinet that the contentious Flag March set to be held on the occasion of Jerusalem Day could lead to an escalation in violence.

Amos Gilad, a former head of Military Intelligence and former top Defense Ministry official, told Army Radio that the march should be scrapped this year.

"I would eliminate anything that creates friction. Jerusalem is currently a powder keg that could explode," Gilad said.

Police Commissioner Kobi Shabtai held a security assessment on Saturday on the recent tensions in Jerusalem and ordered commanders, in particular in the Jerusalem area, to "significantly" boost their forces ahead of "another series of expected events over the coming days."

Jerusalem Day is a national holiday that begins Sunday night, in which Israel celebrates the unification of Jerusalem and religious nationalists hold parades and other celebrations in the city.

Tensions remain high in Jerusalem on Sunday morning a day after clashes broke out between Palestinians and Israeli police, injuring dozens. At least 90 people were injured on Saturday, the Palestine Red Crescent said. On Friday, Israeli forces stormed Al-Aqsa and injured more than 200 Palestinians. Israeli police said at least one officer was hurt.

Jerusalem's Al Aqsa mosque complex is one of Islam most revered sites but its location is also the holiest site in Judaism, known as the Temple Mount. The mosque is a frequent flashpoint for violence, but Friday's was among the worst in years.