The figures come as the UK tries to gradually emerge from lockdown in phases, with brakes applied to wider public gatherings and sporting events at the end of last month. 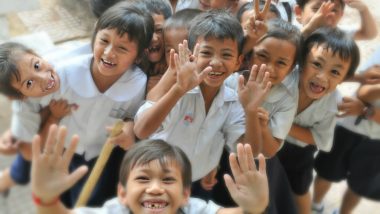 London, August 9: One of the world's largest studies of its kind is expected to conclude that there is little evidence that coronavirus is transmitted in schools, according to a UK media report on Sunday, giving a boost to their proposed reopening next month.

Professor Russell Viner, President of the UK's Royal College of Paediatrics and a member of the government's Scientific Advisory Group for Emergencies (SAGE), told ‘The Sunday Times' that a forthcoming report by Public Health England (PHE) would help put parents' minds at rest as the UK prepares for a full reopening of schools after lockdown and the current summer holiday period in Britain. Also Read | 'Gautam Buddha Was Born in Lumbini': Nepal Rejects Jaishankar's Claim That The Spiritual Figure Was Indian.

“A new study that has been done in UK schools confirms there is very little evidence that the virus is transmitted in schools,” Viner told the newspaper. “This is some of the largest data you will find on schools anywhere. Britain has done very well in terms of thinking of collecting data in schools,” he said. Also Read | Andhra Pradesh COVID-19 Centre Fire | PMO Announces Ex-Gratia: Live Breaking News Headlines & Coronavirus Updates on August 9, 2020.

The study was carried out in 100 institutions in the UK and is expected to be published later this year. About 20,000 pupils and teachers in 100 schools across England were tested to monitor the spread of the disease up to the end of the summer term – which runs from April-July in Britain.

“It is absolutely essential for schools to reopen in September. The risks to children from Covid are very low and the risks of school closures we know are very serious,” he said. The intervention comes as UK Prime Minister Boris Johnson is said to be focussing on getting all children back to school from the September term as a matter of priority.

The coronavirus pandemic lockdown resulted in schools closing on March 20 and many would have been closed for more than five months by the start of what marks a new academic year in England next month. On June 1, some schools began a limited reopening for early years and primary pupils. Under the government's plans, most children across the country should be back in class by next month.

“The Prime Minister confirmed that children's education must be the country's top priority over the coming months and that in the event of a local lockdown, his expectation would be that schools would be the absolute last sector to be asked to close – and unprecedented steps would be taken to avoid this happening anywhere in the country,” a Downing Street spokesperson said.

“In the event of a more severe local lockdown where strong measures are needed in an entire town or city, the PM has been clear that businesses including shops, pubs and restaurants should be forced to close first, with schools remaining open for as long as possible."

However, teaching unions have warned that the government's plans to bring all school years back to class at once through so-called bubbles of student groupings and classes and staggered drop off times may be “unworkable”.

Earlier this week, UK schools minister Nick Gibb said that the government cannot “decree” that classroom education would be prioritised because decisions would have to be made by local health chiefs.

On Saturday, the UK reported a further 55 people had died after testing positive for coronavirus, taking the total to 46,566. The figures come as the UK tries to gradually emerge from lockdown in phases, with brakes applied to wider public gatherings and sporting events at the end of last month.