Get latest articles and stories on World at LatestLY. The youth of Maldives are voicing their concerns over former President Abdulla Yameen's racist agenda of creating hate and fear in the country and are calling out for his re-arrest raising flags about his involvement in a corruption scandal. 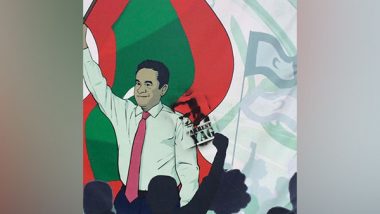 Male [Maldives], May 14 (ANI): The youth of Maldives are voicing their concerns over former President Abdulla Yameen's racist agenda of creating hate and fear in the country and are calling out for his re-arrest raising flags about his involvement in a corruption scandal.

Yameen had always been a man with many secrets. It all started with the power struggle between former Maldives' Vice President Ahmed Adeeb and Yameen. Yameen was highly impressed by Adeeb, so much that when he won the presidential election in 2013, he made Adeeb the "tourism minister."

Yameen's own Progressive Party of Maldives (PPM) members were dismayed with his decision however no one dared to question Yameeen. But, this soon took an ugly turn. Things started going astray after an explosion that took place when Yameen and his wife were returning home after concluding their visit to Saudi Arabia, reported Maldives Voice.

The former President escaped unhurt but his wife, Fathimath suffered minor injuries. At first, the authorities said that the explosion could have been a mechanical failure but they later changed the statement saying that it was an attempt to assassinate Yameen and launched a criminal investigation.

Following the bomb attack, rumours began circulating that Adeeb was behind it. According to Maldives' Constitution if the President dies, is incapacitated or resigns, the Vice President succeeds him.

Adeeb was arrested at the airport when he returned from an official visit to China. While Sri Lanka and Saudi Arabia confirmed that the bomb was planted with the intent to murder the President, the US Federal Bureau of Investigation (FBI) has said that there is "no conclusive evidence" to link the blast on the boat to a bomb.

Yameen sacked Adeeb's defense minister and the police commissioner and paralyzed Adeeb's support system. Adeeb was also stripped of his right to have a fair trial. Adeeb was also made a Yameen's scapegoat over the 2014 biggest corruption scandal in Maldivian history, MMPRC.

The embezzlement of nearly USD 80 million from the tourism promotion company was a corruption scandal of unprecedented scale in Maldivian history.

Yameen accused Adeeb of corruption charges. Former Auditor General said that he alerted the President about the audit report pointing to corruption but he refused to address the issue and simply shrugged it off.

The bomb attack looked like a well-executed plan by Yameen to frame Adeeb so that he would end up getting in jail. The person who would go on to benefit the most from jailing Adeeb would be Yameen, as per the media portal.

When the nation was still in turmoil and recovering from the first multi-party democratic Presidential poll of 2008, which saw Mohamed Nasheed ousting Maumoon Abdul Gayoom from his 30 long years of autocratic rule, Adeeb started emerging himself in talks about economics- which not many politicians in the country were interested or less aware about it at that time.

Yameen's hunger for power was so great that he made sure to cripple Adeeb's support system as one after another people close to Adeeb were either getting jailed or escaping the nation in fear of Yameen causing harm to them. (ANI)