There's no end to Twitter saga after billionaire Elon Musk's dramatic entry to buy out the micro-blogging site, with rapper Snoop Dogg too throwing his hat in the ring after the news broke out that Tesla CEO's deal is on hold. 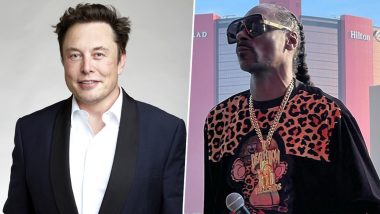 Washington, May 16: There's no end to Twitter saga after billionaire Elon Musk's dramatic entry to buy out the micro-blogging site, with rapper Snoop Dogg too throwing his hat in the ring after the news broke out that Tesla CEO's deal is on hold. Rapper Snoop Dogg tweeted that he "may have to buy Twitter". This set off a fun trail on his timeline, with Musk joining in with a "fire" emoji. Elon Musk Buys Twitter: Tesla CEO Elon Musk Acquires Twitter for US$44 Billion.

While Musk's buy out plan has already flooded his timeline on Twitter with ideas for the transformation of the microblogging site, the rapper too shared his vision. As the boss of Twitter, the Rapper laid out a set of new rules for the company, which included replacing the board of directors, giving everyone a verified account and putting free internet on aeroplanes.

"Gonna replace the board of directors with Jimmy from my corner Fish Fry, Tommy Chung and that guy with the ponytail on CNBC. Everyone gets a blue checkmark. Even that bots with 10 letters in their name that hit you in DMs n just say "Hello". Nah f**k those bots," he said in a series of tweets.

Musk on Saturday (local time) said that Twitter's legal team accused him of violating a non-disclosure agreement by revealing that the sample size for the social media platform's checks on automated users was 100. "Twitter legal just called to complain that I violated their NDA by revealing the bot check sample size is 100!" Musk tweeted.

Twitter recently agreed to an acquisition by Tesla CEO Elon Musk in a deal worth USD 44 billion, although it is still subject to shareholder approval. However, Elon Musk declared that the USD 44 billion takeover bid of the micro-blogging site is on hold. Musk said earlier this week that Twitter's decision to ban former US President Donald Trump was a mistake and he would reverse it if his acquisition of the social media company is successful.