“The leaders agreed to a new partnership in defence and security, including working together on undersea capabilities in the Indo-Pacific, helicopters, the development of Indian-made fighter jets and other defence equipment,” a Downing Street spokesperson said. 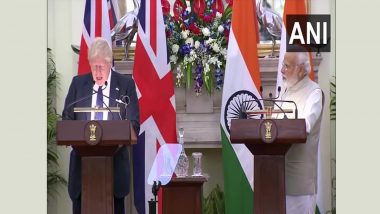 London, April 22: Prime Minister Narendra Modi and his UK counterpart, Boris Johnson, set the negotiating teams on both sides a Diwali deadline for the conclusion of an India-UK free trade agreement (FTA) during bilateral discussions in New Delhi on Friday. Diwali this year falls on October 24 and this new goal has been pushed forward from the previous timeline of striking a deal by the end of this year.

Johnson, on the final day of his two-day visit to India, said the FTA could double India-UK trade by 2030 and drive down consumer prices. “Today Prime Minister Modi and I told our negotiators to get it done by Diwali in October,” said Johnson.

“This could double our trade and investment by the end of the decade, driving down prices for consumers, and increasing wages across the UK by as much as 3 billion pounds,” he said. On the eve of the visit, officials had confirmed that four out of 26 chapters within the FTA have been finalised during the first two rounds since the negotiations began in January and "significant progress" has been made in the remaining 22 chapters. Boris Johnson's India Visit: UK PM's Visit To JCB Factory Sparks Controversy.

The third round of talks between the negotiating teams is set to begin in New Delhi next week. The visiting British Prime Minister, who was welcomed by Modi with a Guard of Honour at Rashtrapati Bhavan earlier on Friday, pointed out that Indian investment already supports almost half a million British jobs, and with India's population bigger than the US and the European Union (EU) combined, there is a lot of potential to take India-UK trade and investment to a “whole new level”.

“Our new and expanded Defence and Security Partnership will enable India to strengthen its own domestic defence industry as well as protecting vital shared interests in the Indo-Pacific,” said Johnson. “India is an incredible rising power in Asia, with one of the fastest growing economies in the world – already worth 2.25 trillion pounds – and set to be the world's third largest economy by 2050.

India is also our biggest partner in the Indo-Pacific, which is increasingly the geopolitical centre of the world, with two-thirds of humanity, and a third of the global economy – and that share is rising every year,” he said. Meanwhile, a Downing Street readout described the Johnson-Modi talks at Hyderabad House in New Delhi as “in-depth”, during which Johnson thanked Modi for the “opportunity to visit the great nation of India again”.

“The leaders agreed to a new partnership in defence and security, including working together on undersea capabilities in the Indo-Pacific, helicopters, the development of Indian-made fighter jets and other defence equipment,” a Downing Street spokesperson said.

“They also discussed the ways in which the UK and India are working together to bring down the cost of clean energy and hugely increase our renewable capacity, particularly in green hydrogen and offshore wind,” the spokesperson added.