Get latest articles and stories on World at LatestLY. Ahead of the Sindh local government (LG) elections, Pakistan's former Prime Minister Imran Khan has urged the citizens to vote for his party and eliminate 'Zardari mafia', local media reported. 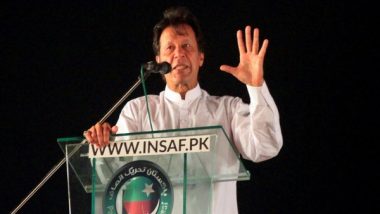 Also Read | Pakistan: Tehreek-E-Taliban Warns Govt, Says Thier Fighters Will Wage Countrywide Jihad if Govt Does Not Fulfill Their Demands.

Taking to Twitter, Imran Khan wrote, "LBEs (Local Body Elections) are to be held in 4 divs of Sindh. Despite PPP terrorising our candidates & not following SC orders to devolve authority to local reps under Art 140A, we are taking part in the elections. I ask people of Sindh to vote for PTI candidates & eliminate the Zardari Mafia."

The total number of registered voters is 1,149,2680. The election commission printed 2,950,000 ballot papers for the first phase of Sindh LG polls.

While addressing a seminar, Fazlur Rehman said, "It was necessary for the political parties to gather their force on a single platform after 2018 general elections. The PTI government had created the economic crisis in the country under a plan."

He alleged that Imran Khan had initiated a false narrative of a threat letter and his assassination plot which was even rejected by the United States. (ANI)