The 25th Amendment allows for the president to be removed from office by the vice president and a majority of the Cabinet. 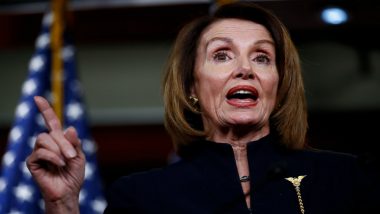 Washington, January 8: US House of Representatives Speaker Nancy Pelosi on Friday spoke to the chairman of the Joint Chiefs of Staff about preventing "unhinged" President Donald Trump from initiating military actions or a nuclear strike.

Pelosi in a letter to Democratic members of the House of Representatives said that she spoke with Gen Mark Milley "to discuss available precautions for preventing an unstable president from initiating military hostilities or accessing the launch codes and ordering a nuclear strike." Reiterating her demand to remove President Trump from office, she said, “The situation of this unhinged president could not be more dangerous, and we must do everything that we can to protect the American people from his unbalanced assault on our country and our democracy."

"Nearly fifty years ago, after years of enabling their rogue President, Republicans in Congress finally told President Nixon that it was time to go," she wrote. Donald Trump Not to Attend US President-Elect Joe Biden's Inauguration Ceremony on January 20.

“Today, following the President's dangerous and seditious acts, Republicans in Congress need to follow that example and call on Trump to depart his office – immediately. If the President does not leave office imminently and willingly, the Congress will proceed with our action,” Pelosi said.

Trump is set to leave on January 20 when Democrat Joe Biden is to be inaugurated. Pelosi is meeting with the House Democratic caucus Friday to consider impeachment proceedings against the president.

“As you know, there is growing momentum around the invocation of the 25th Amendment, which would allow the Vice President and a majority of the Cabinet to remove the President for his incitement of insurrection and the danger he still poses. Yesterday, Leader Schumer and I placed a call with Vice President Pence, and we still hope to hear from him as soon as possible with a positive answer as to whether he and the Cabinet will honor their oath to the Constitution and the American people,” Pelosi said. Indian-American Sabrina Singh Appointed as Deputy Press Secretary to Vice President Kamala Harris.

"Following an horrific assault on our Democracy, our Democratic Caucus showed to the country and to the world that we would not be diverted from our duty to validate the election of President-elect Joe Biden,” she wrote.

In an unprecedented assault on democracy in the US, thousands of supporters of outgoing President Trump stormed the Capitol building on Wednesday and clashed with police, resulting in four deaths and interrupting a constitutional process by Congress to affirm the victory of Biden and Vice President-elect Kamala Harris in the November 3 election.