Get latest articles and stories on World at LatestLY. Reporters Without Borders (RSF) has condemned an Afghan journalist's trial by a military court last weekend, as well as recent arbitrary and illegal arrests of other journalists in Afghanistan. 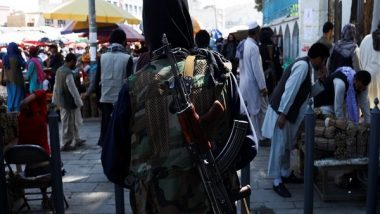 Kabul [Afghanistan], May 13 (ANI): Reporters Without Borders (RSF) has condemned an Afghan journalist's trial by a military court last weekend, as well as recent arbitrary and illegal arrests of other journalists in Afghanistan.

The Taliban government has not kept its promise to apply the country's press law, under which journalists are guaranteed the freedom to work, according to RSF.

Khalid Qaderi, a poet and journalist with Radio Norroz in the western city of Herat, was sentenced to a year in prison by a military court in Herat on 7 May, his sister - a lawyer and human rights defender - reported in a tweet.

After his arrest by the Taliban intelligence agency (Istikhbarat) on March 17, his family spent several days without knowing what had happened to him. His case was transferred to the Herat provincial prosecutor's office, whose chief prosecutor presented the case during the trial before the military court.

RSF has learned that this young journalist was accused of posting content critical of the Taliban, including his radio broadcasts, on Facebook. In his defence, Qaderi told the court: "I realised my errors and I deleted the posts from my Facebook page."

According to the media watchdog, this is the first time in 20 years in Afghanistan that a journalist has been tried by a military court, which is supposedly reserved for members of the armed forces. The trial and sentence were illegal as well as disproportionate.

Qaderi was not defended by a lawyer and was even forced to renounce his right of appeal, RSF said.

Under Afghan law, complaints against journalists and media outlets are supposed to be handled by a Media Offences Verification Commission, and can be transferred to a court only if this commission so decides.

The recent victims of arbitrary arrest include Elaham Haquiquat, a journalist who was arrested by police in the southern city of Kandahar on April 17 for trying to cover a protest, and was held for several hours. (ANI)