Amid the ongoing Taliban offensive, Defence Secretary Lloyd Austin on Wednesday said that the United States has delivered three refurbished military helicopters to Afghanistan and such assistance will continue in the future. 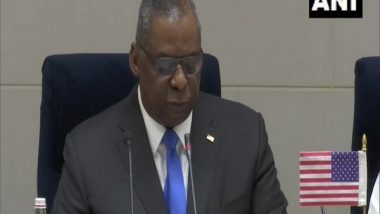 Washington DC [US], July 22 (ANI): Amid the ongoing Taliban offensive, Defence Secretary Lloyd Austin on Wednesday said that the United States has delivered three refurbished military helicopters to Afghanistan and such assistance will continue in the future.

Addressing a press briefing, Austin said, "We are going to provide on Friday three newly refurbished UH-60s landed in Kabul and they will continue to see a steady drumbeat of that kind of support going forward."

"After August our focus is on those elements that present threats to the United States of America. So there will be counter-terrorism focus there."

Since the US announced its withdrawal plans in May, Afghanistan has witnessed a surge in violence in the war-torn country. The pullout will be completed by August.

With the military withdrawal merely weeks away, the Defence Secretary said the US is doing a lot to support the Afghan military and Afghan leadership."Make no mistake that we remain committed to helping the Afghan security forces and the Afghan government going forward. And we are doing what we said we will do and putting the pieces in place to ensure that we can provide that support," Austin asserted.

Answering a question of Al-Qaeda's resurgence, he added "that is something that we are watching closely and we will continue to keep an eye on that. Our major focus going forward is that violence and terrorism cannot be exported from Afghanistan to our homeland."

"Earlier, Taliban had committed to not providing support to Al-Qaeda. We expect them to meet that commitment."

The Defence Department had said that the US will beef up the Afghanistan Air Force with 37 Black Hawk helicopters and help refurbish a large part of its fleet of Russian-made Mi-17 helicopters.