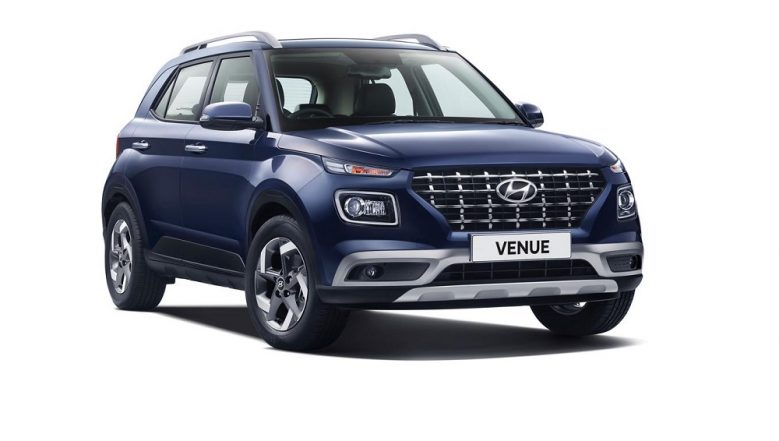 Hyundai Motor India (HMIL) on Wednesday officially unveiled its first sub-compact SUV in the Indian market. The car maker also introduced the SUV on the global front at the ongoing  New York International Auto Show 2019 along with 2020 Hyundai Sonata. To be positioned below Creta, the SUV is expected to be launched in India by next month. The SUV will be taking on Maruti Vitara Brezza, Mahindra XUV300, Tata Nexon & Ford EcoSport when launched in the country. Moreover, the car maker has also introduced BlueLink technology in India wherein the company has collaborated with Vodafone India for network connectivity. 2019 Hyundai Venue Sub-Compact SUV Design Sketches Officially Released; Scheduled To Make India Debut on April 17.

The new BlueLink technology from the Korean automaker features 33 artificial intelligence & connected features, of which 10 of them are design particularly for the Indian market. As per the market reports, the company is eyeing around 8000 units monthly to grab one third market share in the segment for the first year.

Aesthetically, the newly unveiled Hyundai Venue 2019 SUV borrows design elements from the elder sibling- Hyundai Creta wherein the latter features a similar silhouette. The SUV will also carry spot split DRL-headlamps which will be lifted from Hyundai Kona. At the rear, the tail lights will feature LED units in the top-end versions. Dimensionally, the SUV measures 3995mm in length, 1770mm in width and 1590mm in height along with wheelbase of 2500mm. Hyundai Venue Aka Hyundai QXi Sub-Compact SUV - What We Know So Far.

Moreover, the Hyundai Venue is one of the important vehicles that the company is developing currently for the Indian market. The car maker will also be introducing new Hyundai i20 Active and new generation Creta after Venue.

Under the hood, the Venue SUV will be available in petrol and diesel engine options. The 1.2-litre naturally aspirated and 1.0-litre turbocharged engines will be tuned to make 83bhp/115Nm & 120bhp/172Nm of power figures. The 1.4-litre turbocharged oil burner will churn out 90 bhp of max power with peak torque of 220Nm. Transmission functionalities will be carried out by 5-speed manual (1.2L) and 6-speed manual (1.0L & 1.4L) gearbox along with 7-speed dual-clutch automatic.