If you'd ask me, I would say that there is no better representation of the Japanese heritage than Dashi. Just like sushi and Japanese tea, Dashi has been a source of immense pride for the Japanese. I want people worldwide to experience the same happiness I had when I had Dashi for the first time. That smile, that moment of epic joy is what I want!" 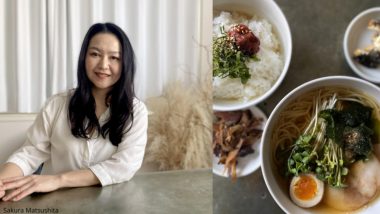 If you'd ask me, I would say that there is no better representation of the Japanese heritage than Dashi. Just like sushi and Japanese tea, Dashi has been a source of immense pride for the Japanese. I want people worldwide to experience the same happiness I had when I had Dashi for the first time. That smile, that moment of epic joy is what I want!"

Having a conversation with Sakura Matsushita, currently building her initiative around promoting Japanese authentic food ingredients and well known Japanese soup called “Dashi”. We learn about her initiative and her life. Ma'am, it's an honor being with you today. Could you please tell us about yourself and your ambition?

The Dashi I drank helped my taste buds, and my body reset after a week of not eating anything. To my utter surprise, it was so delicious, and I literally had no idea that such a yummy soup was actually around me all that time.

After this fantastic experience with Dashi, I started my research over it. I bought different kinds of Dashi soup and tried all of them. However, my studies made me realize that there are no proper advertisements and sales techniques within the Dashi Industry, so many people don't even know about it yet. I observed that despite there were many Dashi products, there were not many websites of its manufacturers.

There were just a handful of online stores, and most of them were outdated. Most significantly, there were just a few online pages which actually conveyed the wonders of Dashi. Well, the primary reason for such outdated frameworks is the lack of financial resources. Most of the Dashi manufacturers were small and medium-sized companies, who couldn't invest their monetary assets to upgrade their systems and promote their product.

My study made me realize the dire of need for effective sales and marketing strategies. I told everyone that it's so significant to promote Dashi properly because this is the only way people will know about its existence, its countless benefits and its numerous uses. At that point, I got determined to spread Dashi-related awareness to the world. I decided to do something about the situation. Creating a web-based media for Dashi was the foremost initiative I took to promote it.

Could you share with us more about the “Dashi soup” and its benefit?

There is a variety of Dashi available, but frequently, it is made of boiling "bonito flakes" and "kombu." These two ingredients create a synergy of umami around and give a very strong umami taste. Let me share another secret regarding umami. Did you know that Mother's milk and amniotic fluid also contain umami? Well, they contain an umami derivative, glutamic acid, and the concentration of glutamic acid in mother's milk is almost the same as in kelp broth.

Back in the old days in Japan, katsuobushi and kombu were special items, presented to the court for celebrations. It was not until the Edo period (1603-1868) that they became available to the ordinary people in Japan.

Bonito flakes are rich sources of vitamins, minerals, and amino acids. These nutrients make it useful in relieving fatigue and anti-ageing. Moreover, kelp is also rich in minerals. It has a very positive effect on controlling high blood pressure, arteriosclerosis, diabetes, and osteoporosis. This is why people feel relaxed and smile just by drinking a cup of warm soup stock.

These two are the primary sources of Dashi. They are made using conventional techniques, and they take a very long time to be thoroughly cooked. However, you can easily prepare Dashi, using these two components in just five minutes. Isn't that pretty cool? As much as I know, there is no other ingredient in the world that is capable of producing a delicious and nutritious soup in just five minutes. Hence, it is my passion to spread this incredible superfood all across the globe, and not necessarily restrict its promotion to Japan."

That's absolutely amazing! Can you share some of the major obstacles you had to overcome since you started working on this venture?

"Undoubtedly, Dashi is the traditional foundation of Japanese food. There is no harm to state that it is the lifeblood of Japanese food, especially for vast Japanese restaurants. This is the primary reason why I got refused for writing an article on Dashi. My calls were never answered, and my emails were never taken into consideration. I was rejected most of the times and laid down by the dominating people in the industry.

However, some chefs and manufacturers wanted the spread of Dashi as much as I did. They helped me grow, motivated me to continue my work and, cooperated with me wherever possible. This is why I never gave up and never would I do that. I will continue to conduct interviews and spread the goodness of Dashi as much as I can."

That sounds like a win-win situation! What milestones do you further aim on achieving?

"I want to extend its promotion towards the English version, and overseas using advertisement tools such as YouTube.

I would also like to create my own Dashi-product, which would be a Dashi tea. I want people to enjoy it as their every-day beverage, alone and with their families, and think of it as something similar to the Japanese tea.

Secondly, integrating Dashi with diverse food sources around the globe would also be my goal. Whether it's a country whose people are fond of soups or vice versa, I want to create a particular recipe of each country, which would explicitly fit their country's culture."

Wow, it was so great learning about your initiative, Sakura. I wish you the best for your future.

It was an honor being here, thank you for your precious time!