The first level of Seiwasser consists of twelve exercises, which are a combination of awareness strengthening, flexibility, energizing techniques, concentration, positive thinking and feeling, affirmations. The second level is the powerful self-awareness, strengthening and energising the entire body. 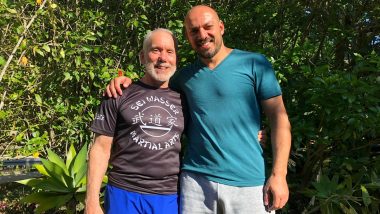 Yasin Seiwasser
From training athletes to attaining supremacy as a life coach, he excels exceedingly.
Yasin Seiwasser, a German national started training in Mixed Martial Arts at the age of eight, and had an intense training for thirty-five years in varied combat styles. He also holds the world record of the fastest knockout of three seconds for the title fight and was officially declared NATO’s self-defence instructor from 2004 to 2007. He has also been credited of training the special forces and marines in Brazil and USA and has been the bodyguard for the royal family of Saudi Arabia, which in itself is a huge achievement.
Yasin holds a degree in psychology and has over thirty years of rigorous practice in the mind and body techniques, which makes him the most sought after mental and life coach who is also a distinguished speaker at events and seminars across the world. Yasin developed the famous coaching program Seiwasser, the Art of Life for the mind, body and soul which has helped hordes of people who have gone through the training. This is a seven level program including easy and effective techniques to cleanse the mind, body and soul.
The first level of Seiwasser consists of twelve exercises, which are a combination of awareness strengthening, flexibility, energizing techniques, concentration, positive thinking and feeling, affirmations.
The second level is the powerful self-awareness, strengthening and energising the entire body.
The third level is well being which is about increasing one’s flexibility, agility and well-being.
Level four is all about the right nutrition for the body and the soul.
Hand mudras and Jin Shin Jyutsu make the fifth level where we learn that the five elements of water, earth, ether, air and fire represent the five fingers.
Level six is waking up to your inner energy, and here we strengthen the life force in the body through meditation.
Level seven has exercises to be applied in your daily chores of life, with easy yet practical techniques that can be applied while walking, driving, or even at work.
Level eight, is an advanced level and requires complete understanding till level five of the program.
To conclude, one can have an individual training plan according to their comfort level. Many who have undergone the training have benefitted tremendously, the reason for it getting popular by the day.
To know more, visit www.seiwasser-artoflife.com
Comments
Tags:
life coach martial artist Yasin Seiwasser
Comments
You might also like