Omnichannel eyewear unicorn Lenskart on Thursday announced it has taken a majority stake in Japanese eyewear brand Owndays in a deal that is reportedly around $400 million. 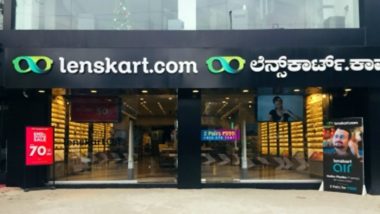 New Delhi, June 30: Omnichannel eyewear unicorn Lenskart on Thursday announced it has taken a majority stake in Japanese eyewear brand Owndays in a deal that is reportedly around $400 million.

This will take the merged firm to reach 13 markets in Asia including India, Singapore, Thailand, Taiwan, Philippines, Indonesia, Malaysia and Japan.

Owndays Co-founders, CEO Shuji Tanaka and COO Take Umiyama, will continue to be shareholders and lead the management team which will continue to operate as a separate brand. Google Invests in Indian Fintech Startup Progcap.

The current major shareholders L Catterton, Mitsui and Principal Investments will exit their positions to Lenskart.

"I see Lenskart and Owndays sharing the same set of values centered around enriching customers' lives, caring for people in our communities, as well as continuous learning, and we also have very complementary skill sets," said Peyush Bansal, Co-Founder, and Group CEO at Lenskart.

Lenskart with its 300 people engineering team, estimated to scale up to 500 people in FY23, will help build a stronger online and Omni experience for Owndays.

The company said it will continue its rapid expansion in India and South East Asia to serve the mass to mid-premium segments while Owndays scales swiftly to cater to premium segments.

"Owndays has been recognized as the eyewear brand of choice across multiple countries in Asia ever since we opened our first overseas store, in Singapore in 2013," said Tanaka.

Founded in 2010, Lenskart ships over 10 million pairs of eyewear every year and has over 20 million app downloads, 300 home eye test representatives as well as over 1,100 stores across India, Singapore,and Dubai.

Owndays has around 460 stores across 13 markets in the region.

(The above story first appeared on LatestLY on Jun 30, 2022 04:44 PM IST. For more news and updates on politics, world, sports, entertainment and lifestyle, log on to our website latestly.com).