Despite the ongoing tussle between Elon Musk and Parag Agrawal, the Twitter board is keen to see the $44 billion takeover deal go through as it is in the "best interest of all shareholders", the media reported on Wednesday. 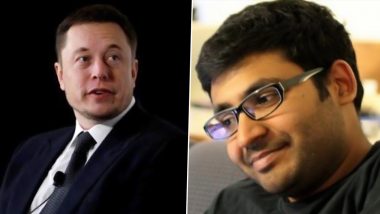 San Francisco, May 18: Despite the ongoing tussle between Elon Musk and Parag Agrawal, the Twitter board is keen to see the $44 billion takeover deal go through as it is in the "best interest of all shareholders", the media reported on Wednesday.

"We intend to close the transaction and enforce the merger agreement," the board said Tuesday in a statement to Bloomberg. Elon Musk vs Parag Agrawal: Tesla CEO Says Deal Cannot Move Forward Until Twitter CEO Shows Proof of Less Than 5% Spam Users

Goldman Sachs Group Inc and JPMorgan Chase & Co may earn a combined $133 million in fees for advising Twitter on the acquisition, but only if the deal goes through.

While Twitter maintains it has less than 5 per cent fake/spammy accounts on its platform, Musk believes the number can be as high at 50 per cent, and wants Agrawal to come clean on this.

In a tech conference in Miami on Monday, a frustrated Musk even said that a viable deal at a lower price wouldn't be "out of the question" as Twitter may be hiding the actual number of users from its advertisers.

Musk said that Twitter could have at least four times more fake accounts than what has been revealed in its US SEC filing, asking the commission to probe the micro-blogging platform's claim.

Meanwhile, Musk will have to pay Twitter $1 billion in termination fee if he drops the $44 billion takeover deal, according to an SEC filing.

The filing said that the micro-blogging platform will also have to pay the same amount if it terminates Musk's takeover deal.

"Upon termination of the Merger Agreement under specified limited circumstances, Twitter will be required to pay Parent a termination fee of $1 billion," according to the SEC filing.

"Musk will be required to pay Twitter a termination fee of $1 billion," if he cancels the deal.

As part of the deal, Morgan Stanley and other financial institutions have committed to providing $13 billion in financing, along with $12.5 billion in margin loans to Musk, against his shares in Tesla and other companies.

Musk will provide financing of approximately $21 billion on his own.

(The above story first appeared on LatestLY on May 18, 2022 12:04 PM IST. For more news and updates on politics, world, sports, entertainment and lifestyle, log on to our website latestly.com).