Anukreethy Vas will be now India's face in Miss World 2018. 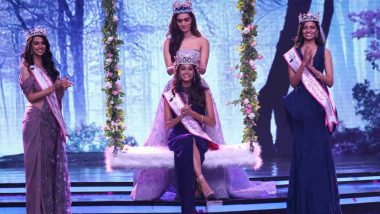 Anukreethy Vas, a 19-year-old from Tamil Nadu has been crowned as Femina Miss India 2018. The grand event held in Mumbai was hosted by Bollywood celebrities filmmaker Karan Johar and actor Ayushmann Kurrana Anukreethy was among the 30 states winners who made it to Miss India 2018 sub contest held earlier this year in the city. She was then crowned fbb Colours Femina Miss Tamil Nadu.

She will now go on to represent India on international beauty pageants. She will be India's face in Miss World 2018. Manushi Chhillar who won Miss World 2017 pageant crowned Vas at the extravagant event. Here are details on her education,  height and complete bio:

Education: The 19-year-old is pursuing BA in French from Loyola College in Chennai to become a translator. She did her schooling from RSK Higher Secondary School in Tiruchirappalli.

Interests: Her interest has been in modelling and acting since long. She is also an athlete.

Parents: She was raised by a single mother and credits her for being an inspiration.

The girls were divided into four zones and mentored by the Who's Who of the industry. The contestants were guided during the process by actor Neha Dhupia (North), Rakul Preet Singh (South), Pooja Chopra (East) and Pooja Hegde (West). The beauty contest in its 55th edition is organised by Femina, a women's magazine by The Times Group. The extravagant event was held at Dome, NSCI SVP Stadium, Mumbai.

(The above story first appeared on LatestLY on Jun 20, 2018 09:57 AM IST. For more news and updates on politics, world, sports, entertainment and lifestyle, log on to our website latestly.com).