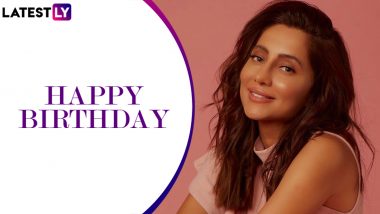 Anusha Dandekar has been a popular face on television since the 90s. From being a gorgeous model to an amazing VJ, Dandekar also tried her hands at singing. She's a gifted dancer and we have seen her show us her amazing dancing skills in several songs. Anusha is currently a favourite among fans for being the host of MTV's Love School along with boyfriend Karan Kundra. She has also co-judged India's Next Model with Malaika Arora. Anusha is a woman of many talents and we truly believe there's nothing she can't do. Anusha stepped into the Indian entertainment industry with the TV show MTV Dance Crew and soon became a household name. Post that, Anusha has hosted shows like MTV Teen Diva and many more. Anusha Dandekar Trolled for Posting Picture With Vijay Mallya’s Son Siddharth! VJ Defends Her Action.

As the VJ aka Model celebrates her birthday on January 9 and turns 38, we look at some of her best song videos. You'll be surprised to see a young and much different looking Anusha in 2003's Mumbai Matinee song "Loot Gaye". It almost feels like a forgotten gem now. Here's looking at some more song videos.

This is a really old song and after watching this video, you may remember seeing it on MTV back in the day. Anusha floored us with her moves in this one!

Better Than Your Ex:

This was Anusha's debut international single and it received quite a lot of love from her fans. The video featured her looking all glam in various getups.

This is another special number considering it brought together Anusha along with her sister Shibani Dandekar. The Bhavesh Joshi song featured Arjun Kapoor along with the Dandekar sisters and was quite a hit.

While these are our favourite Anusha Dandekar numbers, the best one is yet to come considering Karan Kundra and Anusha Dandekar are all set to be seen in a wedding number. The stars have taken to their social media to share the poster of the song which features Karan Kundra, Anusha Dandekar and the singer Aditi Singh Sharma and we can't wait to watch it soon.

(The above story first appeared on LatestLY on Jan 09, 2020 09:01 AM IST. For more news and updates on politics, world, sports, entertainment and lifestyle, log on to our website latestly.com).