Before Atlee's Planned Movie With Them, Did You Know Shah Rukh Khan and Nayanthara Starred Together in a Music Video?

Is Nayanthara the leading lady opposite Shah Rukh Khan in Atlee's next? Well, nothing official is out as of now, but what we know is that SRK and Nayanthara have collaborated earlier too for a music video. Do not believe us, check out the video inside! 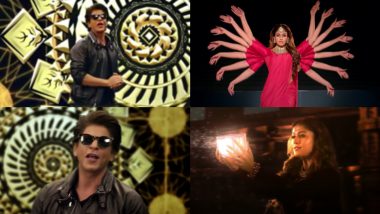 Bollywood superstar Shah Rukh Khan and South beauty Nayanthara are currently all over the internet. You may ask why? Well, the reason behind the same is that as per Pinkvilla, Nayanthara is finalised as the female lead opposite King Khan in filmmaker Atlee's next. Fans of both the actors cannot keep calm and are rejoicing over the collaboration. However, nothing official is confirmed by the makers yet. Amid this chaos, we are about to serve you fun trivia. Well, did you know that SRK and Nayanthara have worked together before? Read on. Shah Rukh Khan Has Started Shooting For Atlee's Movie? This Picture Suggests So.

So, basically, Shah Rukh and Nayanthara have starred in 'Jai Hind India' song which was made for Hockey World Cup 2018. In the clip, we don't see the two superstars together in the same frame but the two are definitely part of the melody. The song is sung by AR Rahman. While SRK looks at his best, Nayanthara can also be seen in different getups and avatars. We bet you didn't know about this. Shah Rukh Khan To Pair Up With Nayanthara In Atlee's Movie And Taapsee Pannu In Rajkumar Hirani's Film - Reports.

Now, if Nayanthara and SRK are seen together in Atlee's upcoming, then we can surely say that it will not be their first collab. For the unaware, Nayanthara was also the first choice for an item number in SRK's Chennai Express, wherein later Priyamani was roped in. Coming back to the latest trend, do you think SRK-Nayanthara are doing Atlee's next? Tell us your view in the comment section below. Stay tuned!

(The above story first appeared on LatestLY on Jul 21, 2021 05:02 PM IST. For more news and updates on politics, world, sports, entertainment and lifestyle, log on to our website latestly.com).