Excited fans of Beyonce, also known as BeyHives, had a new nickname for this year’s festival called ‘Beychella’. 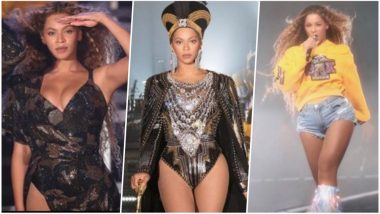 Beyoncé performed for multitude of screaming fans on Saturday night at Coachella after a year’s wait. Appearing at the festival in India, California, Beyoncé performed one incredible dance routine after another without breaking a sweat. She opened her set by addressing her crowd, “Coachella, thank you for allowing me to be the first black woman to headline,” Beyoncé said before singing Run the World (Girls). The song was a powerful salute to feminism where Beyoncé shouted to every woman present and thanked those who had paved the way before her. Excited fans of Beyoncé, also known as BeyHives, had a new nickname for this year’s festival called ‘Beychella’.

Those rumoured 10-hour a day rehearsal ahead of the show certainly paid off as she didn’t put a foot wrong. Beginning with her 2003 debut solo single, ‘Crazy in Love’ she then transitioned into ‘Freedom’, ‘Formation’ and ‘Sorry’ from her 2016 visual album Lemonade. DJ Khaled’s voice was heard on the speakers at one point to announce: “After tonight, Coachella gotta [sic] rename Coachella the Beychella. New name alert: Beychella!” Beychella became the top trend on Twitter for the rest of the performance.

Queen Bey’s Fans Went Crazy on Twitter During the Performance

Beyoncé is the Greatest Living Entertainer

Jigga for the deja vu.

The greatest living entertainer is a Black woman named Beyonce. This is not up for debate.#Beychella

Some Found It Spiritual

It Was the Performance of the Decade

#Beychella is the performance of the decade and the one after that and so on pic.twitter.com/kIM2U9n0l8

For nearly two hours, Beyoncé revealed surprise after surprise. She sang ‘Déjà vu’ with her husband Jay-Z and danced with her sister Solange. Coachella attendees also saw a Destiny’s Child reunion. Kelly Rowland and Michelle Williams appeared on stage with Beyonce to sing their 90s hits ‘Say My Name’, ‘Soldier’ and ‘Lose My Breath’.

Just before concluding her performance with the last song, Beyoncé addressed the crowds by saying, “I was supposed to perform last year but I got pregnant, thank God. I had time to dream with two beautiful souls in my belly and this is everything and more I had in my dream, so thank you for sharing this with me.” No one will ever be able to match Queen Bey’s energy and vitality, and her performance at Coachella was a proof of that.

(The above story first appeared on LatestLY on Apr 15, 2018 07:10 PM IST. For more news and updates on politics, world, sports, entertainment and lifestyle, log on to our website latestly.com).