Bob Dylan Birthday: 5 Greatest Hits Of the Music Legend That Became Anthems Thanks to Their Powerful Lyrics (Watch Videos)

For more than half a century, Dylan has served as rock and folk music’s poet laureate with hundreds of greatest hits to his name. His biggest hits include, "Tangled Up in Blue", "Not Dark Yet". 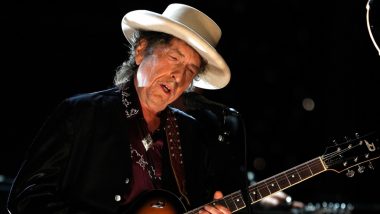 Bob Dylan is without a doubt one of the greatest artists of our time. American singer-songwriter, author, and visual artist has been considered to an icon in pop culture. Much of his work was popular back in the 60s. The protest anthems during the time made him a star. Dylan's body of work can only be defined as legendary. For more than half a century, Dylan has served as rock and folk music’s poet laureate with hundreds of greatest hits to his name. His biggest hits include, "Tangled Up in Blue", "Not Dark Yet". Bob Dylan Birthday: Best Quotes and Sayings by the Nobel Prize-Winning Singer on Life and Love.

The singer celebrates his birthday on May 24 and as he turns 79, we celebrate it with his biggest hits. Dylan is one of the most talented artists of his time and he has made a mark not only in the music industry but also since 1994, Dylan has published eight books of drawings and paintings, and his work has been exhibited in major art galleries. He has sold more than 100 million records, making him one of the best-selling music artists of all time. On his birthday, we celebrate his legacy by looking at some his greatest hits.

In one of his interactions, Bob Dylan once mentioned that he wrote this song in mere ten minutes. Well, if you've heard this song, you'll certainly be more than impressed. The song became a protest anthem of sorts and has had several cover versions over the years.

The song released in 1964 is known for its powerful lyrics. The lyrics express Dylan's anger at the perceived hypocrisy, commercialism, consumerism, and war mentality in contemporary American culture and has been one of his biggest hit. Dylan said that "It's Alright, Ma (I'm Only Bleeding)" is one of his songs that means the most to him.

“Like a Rolling Stone” reached No 2 in the US Billboard charts and became a worldwide hit. The song has been covered by numerous artists till now including Jimi Hendrix Experience and the Rolling Stones and Green Day.

4.Tangled Up in Blue

This song is known for its beautiful lyrics and is considered to be one of the 500 greatest songs of all time. Every Dylan fan has this one in their playlist. When was the last time someone wrote as powerful songs as this?

This Dylan song is yet another treat to the ears. It also managed to gain a lot of attention for its lyrics and Sir Andrew Motion, poet laureate of the united kingdom, listed this track as the greatest song lyric ever written. Bob Dylan Birthday Playlist: From Tambourine Man to Forever Young, 5 Best Songs from the Nobel Prize-Winning Singer.

We hope you enjoy listening to these amazing Bob Dylan songs on his birthday and get inspired by his powerful lyrics.

(The above story first appeared on LatestLY on May 24, 2020 11:14 AM IST. For more news and updates on politics, world, sports, entertainment and lifestyle, log on to our website latestly.com).