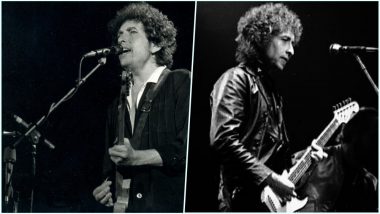 If there’s a singer who has captured the socio-political spirit of our times through his writings, it is Bob Dylan. Born Robert Allen Zimmerman, the American songwriter is inarguably the most respected among his peers for his excellent, poetic lyrical abilities. He’s the only modern-day musician to be awarded the Nobel Prize for Literature for his song-writing skills. Songs such as “Blowin in the Wind”, “Tambourine Man”, “Forever Young” and “The Times They are A-Changing” have been forever etched into our minds, reminding us of Dylan’s lyrical genius. The singer will turn 78 on May 24, 2019. Here’s a list of Bob Dylan’s best songs to mark the poet-singer’s birthday. World Poetry Day 2018: Great Quotes on Poetry and Poets.

“Mr Tambourine Man” is a 1965 track by Bob Dylan, which was so popular that it was recorded live many times. It’s also one of his widely-covered songs, which explores themes such as drug use, insomnia and freedom.

While children of the 90s remember the Guns and Roses version of the song, the old timers know that it was first immortalised by Bob Dylan. The poignant song of a dying sheriff was released in 1973. It’s centred on themes such as death and redemption.

Like a Rolling Stone was a 1965 song by Bob Dylan. Described as “revolutionary” by critics, the song is a combination of different musical elements.

The song “Forever Young” is a lyrical expression of a father’s wishes for his son. Written originally as a lullaby for his eldest son Jesse, Dylan also sang a rock version of this song to avoid sounding too sentimental.

Times They Are a Changing

One of the biggest hits by Bob Dylan is “Times They are a Changing,” which became somewhat of an anthem in the 70s. Dylan had once called it “A song with a purpose” and was deliberately written to create a social impact.

No songwriter has come close to the lyrical brilliance of Bob Dylan. He’s a pop cultural hero who revolutionised songwriting and changed the world with it. Each of his songs is profound and meaningful, which show his philosophical view of life. These songs are some of the very best that the 78-year-old singer-poet has bestowed upon the world.

(The above story first appeared on LatestLY on May 24, 2019 08:00 AM IST. For more news and updates on politics, world, sports, entertainment and lifestyle, log on to our website latestly.com).