Quarantine & Chill! 10 Bollywood ‘Under-the-Radar’ Comedies to Cheer You Up While on COVID-19 Lockdown (and Where to Watch Them) 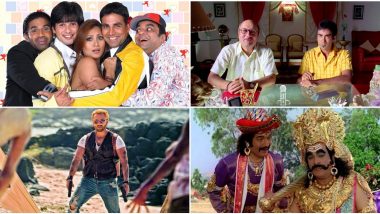 With fears of COVID-19 pandemic looming around us, now is the best time to bring some laughter in our lives. Especially when most of us are in isolation mode in our homes, self-quarantining from getting infected or being treated for the same. In many of the online polls, people have voted for Comedy as a genre they want to watch during these times. Speaking of Bollywood, there is a huge demand for some popular movies like Andaz Apna Apna, Hera Pheri, Housefull series (duh!), Golmaal franchise, Dhamaal movies, 3 Idiots, Delhi Belly and more. Even some classic gems like Chashme Baddoor, Jaane Bhi Do Yaaron,  Angoor, Chupke Chupke, among others. Not to mention, David Dhawan and Priyadarshan films are also much in demand. Quarantine & Chill! 17 WTF Movies of Fave Bollywood Stars to Watch at Home for Pure Guilty Pleasures!

You don't need us to recommend these movies to you. So why not let us suggest some 'under-the-radar' comedies, that don't normally creep into our discussions of our fave funnies, but are quite good in their own right. 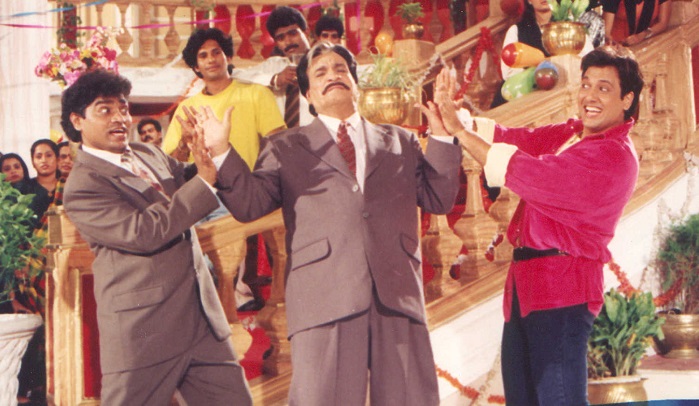 Of course, how can we start this list without mentioning a Govinda film? While Govinda and David Dhawan's jodi was a huge hit in the '90s, the star's best massy comedy, in my opinion, was helmed by Naresh Malhotra. Released at the prime of his superstardom, Dulhe Raja has Govinda at his hilarious best as the dhaba-owner who locks horns with a five-star hotel proprietor, while falling for the latter's daughters. He gets some fantastic support from Kader Khan, Johnny Lever and Asrani. The song "Kisi Disco Mein Jaaye" is still very popular. Dulhe Raja is available on Voot.

Asrani and Kader Khan in Taqdeerwala

Telugu superstar Venkatesh's Bollywood career didn't go boom, but there were a couple of memorable films there like Anari and Taqdeerwala. Speaking of the latter, Taqdeerwala is the remake of a Telugu film, Yamaleela, and is a fantasy comedy involving mythological elements. Venkatesh plays a down-on-luck youngster, whose fortunes change for better after a Bhavishyavani (book of the future) falls from the skies. Literally. Taqdeerwala's main strengths lie in the absurdity of the fantastical situations involving Lord Yama and Chitragupta, played by Kader Khan and Asrani respectively, banished to Earth to find the book. Shakti Kapoor and Anupam Kher also give hilarious turns as the dreaded goon and a befuddled cop respectively. After watching this film, we won't blame you if you go around saying, 'Yam Hai Hum' or have a craving for 'Him Cream'! You can watch Taqdeerwala on Hotstar. 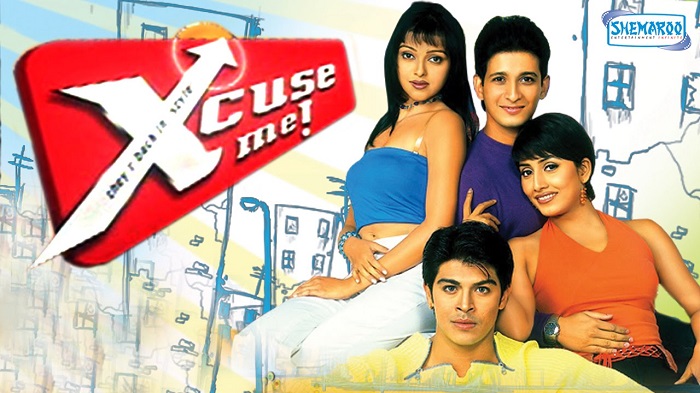 Poster of Xcuse Me

N Chandra's Style was a decent hit when it came out in 2001 and is known for bringing its leads, Sharman Joshi and Sahil Khan to spotlight. The sequel, Xcuse Me, that came out four years later turned out to be a box office failure, Which is unfortunate, as the sequel was a much better film than the original. The humour was funnier and less problematic, Sharman Joshi was in scintillating form and even Sahil Khan reduced some of the woodennes in his performance. You can watch Xcuse Me on Voot. 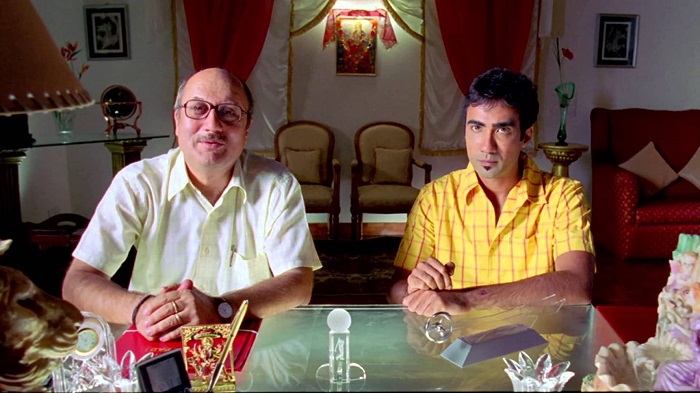 The brilliant Dibakar Banerjee made his directorial debut with this 2006 film, that remains his best feature-film attempt to date (with Shanghai following closely). Khosla Ka Ghosla is a exhilarating blend of humour and heist thriller that avoids starry aspirations, which helps in adding some fun tension to the proceedings. The movie also benefits from its excellent cast - Anupam Kher, Boman Irani, Parvin Dabbas, Ranvir Shorey, Vinay Pathak, the late Navin Nischol - making it a good ensemble affair. You can watch Khosla Ka Ghosla on Netflix.

Yash Raj Films (YRF) launched Y-Films a few years back to launch fresh talent with content that caters to youth. While the subsidiary didn't achieve much success, the films it launched weren't bad. Like, take Mere Dad Ki Maruti for example. Starring Saqib Saleem and Rhea Chakraborty in the lead, Mere Dad Ki Maruti is a fun saga about a boy whose loses a car, that was meant to be a gift to his future brother-in-law, while trying to impress his crush. The situational humour is really good, with some funny moments that will remain stuck in your mind. Like the hero's sister's risque dance during her mehendi ceremony that is cheered by her mother. Or the feel-good climax that has a bundle of surprises. Mere Dad Ki Maruti also stars Ram Kapoor, Prabal Panjabi and Ravi Kishan. You can check out the movie at YouTube and Google on pay-n-view basis. 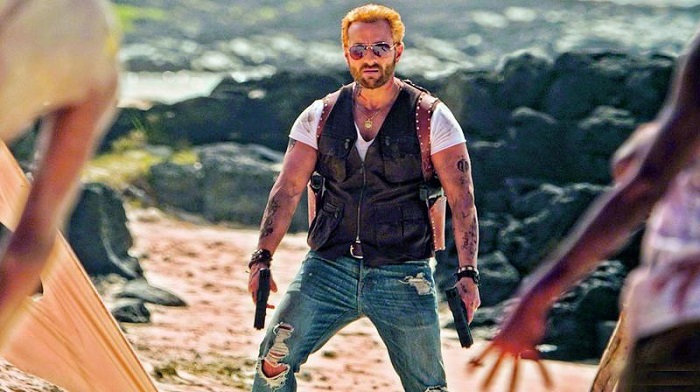 We mentioned Raj and DK's underrated, best effort, 99, in our hidden gems feature. So in this list, let's go for their more starry, crazier attempt to make us laugh in some very horrifying circumstances. Touted as India's first zombie comedy, Go Goa Gone is a screwball comedy that delivers both in laughs and scares. The three leads - Kunal Kemmu, Vir Das and Anand Tewari - are on a roll, especially Kemmu who is also involved in the writing. Then there is Saif Ali Khan, who makes quite the impression as the Half-Russian, Half-Delhi mobster. The third act is underwhelming, but it is a fun ride till then. You can watch Go Goa Gone on Voot. Saif Ali Khan CONFIRMS Being a Part of Vikram Vedha Remake, Lafdebaaz; Unsure About Go Goa Gone 2! 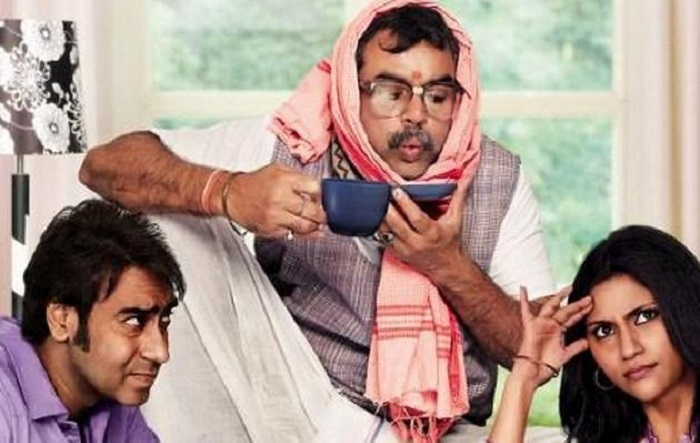 Ajay Devgn's comedic fare is not just restricted to the directorial capabilities of Rohit Shetty (Golmaal, All The Best). There is also this urban comedy, also featuring Konkona Sen-Sharma and Paresh Rawal, that utilises his comic skills to the best use. The movie is about an upper-middle class couple who is tired of a guest, who has over-extended his stay and is interfering in their day-to-day matters. Funny and poignant at the same time, Atithi Tum Kab Jaoge also benefits from the fresh pairing of Ajay and Konkona. Avoid the terrible sequel, though, featuring Kartik Aaryan in the lead. While Atithi Tum Kab Jaoge is not available on OTT platforms officially yet, there are some copies seen on Dailymotion and YouTube. 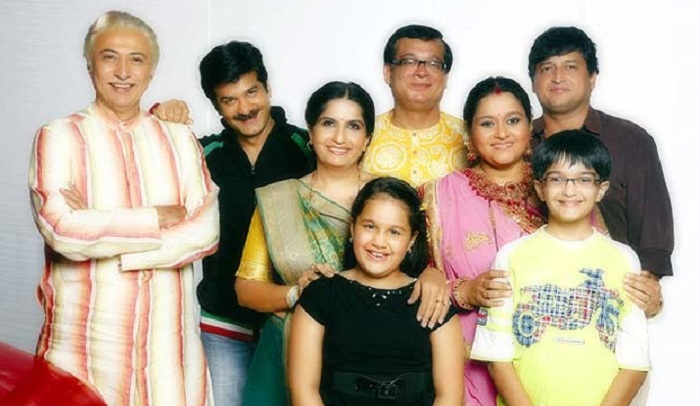 The Cast and Director of Khichdi - The Movie

Very rarely do Hindi TV shows translate into movies, The popular comedy series Khichdi attempted to be one, though it didn't get the same kind of reception on the big screen. The movie, however, did live upto the comic potential of its predecessor, deriving enough laughs from zany antics of the cuckolded Parekh family. Some of the most hilarious scenes include the scene where Satish Shah appears as a God, or the memorial scene which has two funny parodies of popular Hindi Songs, or even Farah Khan's quirky cameo playing herself. You can watch Khichdi: The Movie on Hotstar. 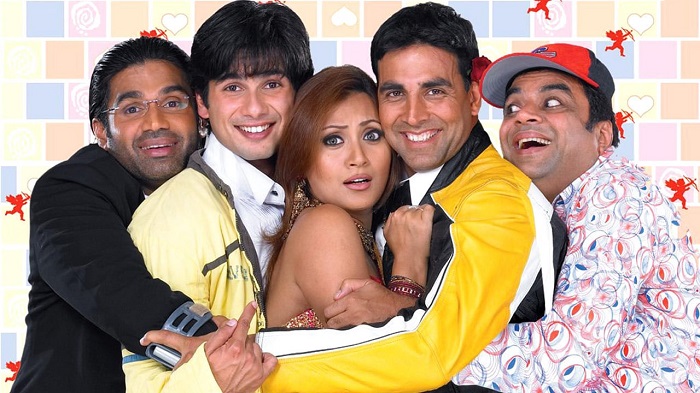 Agree that Deewane Huye Paagal, follow up to Vikram Bhatt's Awara Paagal Deewana, is a sanitised, lazy remake of There's Something About Mary with plenty of loopholes and continuity errors. Shahid Kapoor's male lead role is quite boring, and Vivek Oberoi's sutradhar is annoying. But it is prime example of a film that is elevated by its performances. Akshay Kumar is in terrific form here, as the manipulative detective, while he gets ample support from Suniel Shetty, and Paresh Rawal, as they try every trick in book to woo their ladylove, played by Rimi Sen. The dialogue of Akshay's in the movie, '50 Rs Kaat Over-Acting Ka' has become a very popular meme. You can watch Deewane Huye Paagal on MX Player and Zee5. 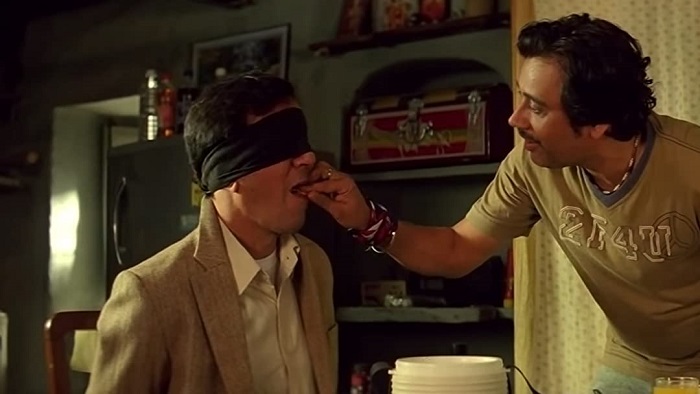 Rajat Kapoor and Manu Rishi in Phas Gaye Re Obama

Directed by Subhash Kapoor of Jolly LLB fame, Phas Gaye Re Obama is a wonderful social satire that is set during the 2008 recession. A gangster who is a huge Obama (then US President) fan and wants to migrate to the States, gets a businessman kidnapped thinking that could solve their recession-crisis. But the cunning businessman, who is in financial doldrums himself, uses this opportunity to save his losses. The movie stars Rajat Kapoor, Manu Rishi Chadha, Amole Gupte, Sanjay Mishra and Brijendra Kala. Particularly watch out for the scene at the English Speaking Course class that butchers the Queen's language in the most hilarious way. You can watch Phas Gaye Re Obama on Sony Liv and Hotstar. 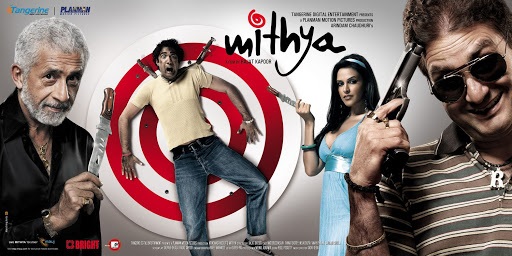 Rajat Kapoor's Mithya is an engaging crime-comedy that benefits from a whimsical premise and a talented roster of cast. Ranvir Shorey plays a Bollywood extra who is hired by a gang to impersonate the leader of their rival gang, whom they secretly murdered, and with whom, he shares facial similarity. While he blends well with his new 'life', the real fun begins when he loses his memory in a freak incident and actually believes himself to be the man he is impersonating. Mithya also stars Naseeruddin Shah, Neha Dhupia, Saurabh Shukla, Vinay Pathak and Iravati Harshe. Sorry to say, though, we are not able to find any copies of Mithya online. If you do find one, please do let us know in the comments section below.

(The above story first appeared on LatestLY on Mar 19, 2020 06:17 PM IST. For more news and updates on politics, world, sports, entertainment and lifestyle, log on to our website latestly.com).