14 Phere: Vikrant Massey to Romance Kriti Kharbanda in His Next, Film to Release in July 2021 (Read Details) 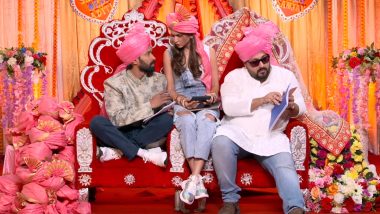 Vikrant Massey was last seen in Chhapaak, whereas Kriti Kharabanda’s last film was Pagalpanti. The latest buzz is Vikrant and Kriti are all set to collaborate for the first time for a social comedy that is titled as 14 Phere. As per a report in Mirror, Vikrant would be romancing Kriti in this hilarious love tale. Vikrant plays the role of a small town boy named Sanjay and Kriti’s character Aditi would be seen as a modern girl. 14 Phere is helmed by Devanshu Singh and the story is penned by Manoj Kalwani. Vikrant Massey: Nepotism Exists but Talent is Needed for Survival.

ZEE Studios’ producer and CEO, Shariq Patel, shared to the tabloid that 14 Phere will highlight how weddings in our country happen between two families and not just between two people. He also shared that they wanted a refreshing pair and hence Vikrant Massey and Kriti Kharabanda were finalised for the role. Talking about working with Vikrant, lead actress Kriti stated, “We met in March and chatted like we had known each other forever. I am looking forward to sharing the screen with someone who is as enthusiastic as me.”

14 Phere is expected to go on floors in November and will be shot in Lucknow, Delhi, Jaipur and Mumbai. The makers have also shared that the film would be releasing on July 9, 2021.

(The above story first appeared on LatestLY on Aug 14, 2020 09:39 AM IST. For more news and updates on politics, world, sports, entertainment and lifestyle, log on to our website latestly.com).