Ajay Devgn Shares His Thoughts on the On-Going Electoral Show, Tweets ‘The Country Has Made Its Choice: Narendra Modi’ 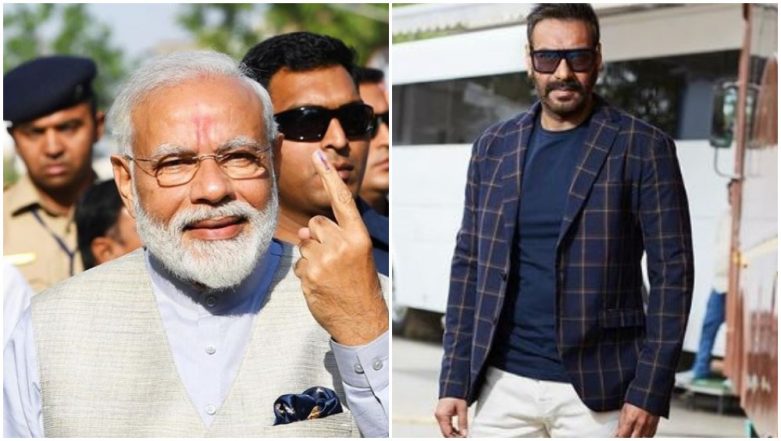 Bollywood celebrities, just like the other citizens of India, are cheering and congratulating Narendra Modi led BJP for his clear and big win at the Lok Sabha elections 2019. The party is garnering majority seats and people have already declared Narendra Modi as their next PM. Actor Ajay Devgn took to his Twitter handle to comment on the on-going election result scenario and said that the people have made their choice quite clear. Lok Sabha Elections 2019 Results: Varun Dhawan, Abhishek Bachchan, Rajinikanth Congratulate Narendra Modi for His Colossal Win Already!

The Singham actor stated that Narendra Modi was the right choice for India, and the citizens know it. He tweeted, “The country knows what is right for them and they have made their choice. @narendramodi.”

The country knows what is right for them and they have made their choice.@narendramodi

The stunning electoral show on Thursday has put all the BJP followers to utter delight. The BJP-led by PM Modi is now all set to retain power for the next five years after making a sweep in the Lok Sabha Elections 2019. According to trends by the Election Commission of India (ECI), BJP candidates are leading in 288 and won 15 seats of the 541 Lok Sabha seats with its allies faring equally well across the country.

Talking about Ajay, the actor is riding on a wave of success from his last release De De Pyaar De, co-starring Rakul Preet Singh and Tabu. The actor will soon make his cameo SS Rajamouli’s RRR and also has Taanaji: The Unsung Warrior on his plate.