Earlier, Anil Kapoor had also collaborated with Jackie Shroff to make fun of Anurag. The two sat to review Anurag's films including Dev D, Choked and Gangs Of Wasseypur. 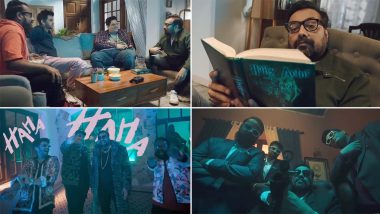 AK vs AK starring Anurag Kashyap and Anil Kapoor is one of the most anticipated films of the year. Releasing on Netflix tomorrow, the audience is eager to see how Anil Kapoor manages to find his kidnapped daughter Sonam Kapoor in the film. The makers fo the film have been indulging in various promotional activities and keeping the fans amused for the time being. Anurag has now created a diss track with former AIB stars for Anil Kapoor. AK Vs AK Trailer: Anil Kapoor Searching For Kidnapped Sonam Kapoor And Anurag Kashyap Mocking Him Looks Raw And Real.

Keeping the theme of jealousy and hatred in mind, Anurag Kashyap deemed fit that he makes a diss track for Anil Kapoor. The filmmaker collaborated with Tanmay Bhatt, Rohan Joshi and Ashish Shakya for this song. The song makes fun of Anil Kapoor's career in the most creative way possible. Sharing the diss track on social media, Anurag also attached a witty caption. He said that the song is an appreciation song for the Jug Jugg Jeeyo actor.

The video begins with Anurag asking the AIB gang to make a diss track. The comedians start roasting Anurag initially but then the director asks them to diss Anil instead. From making fun of his iconic dialogue to making fun of his film Mr. India, the three do it all in the most entertaining way. The setting is also kind of cool and will make you groove to the diss track as well. AK vs AK: Did You Know Anil Kapoor and Anurag Kashyap Had Once Fought for Real Over a Film?

Earlier, Anil Kapoor had also collaborated with Jackie Shroff to make fun of Anurag. The two sat to review Anurag's films including Dev D, Choked and Gangs Of Wasseypur. They made fun of how he is unsuccessful and AK vs AK will only work because of Anil.

Talking about the film, Nawazuddin Siddiqui will also be seen in a special role in the film. Soman Kapoor will feature as Anil Kapoor's daughter who is kidnapped. Directed by Vikramaditya Motwane,  the film will premiere on Netflix on December 24. The film revolves around a brash film director (Anurag Kashyap, as himself) kidnaping the daughter of a movie star (Anil Kapoor, as himself) and the chaos that follows. Anil has to find his daughter in real-time as his next blockbuster in AK vs AK.

(The above story first appeared on LatestLY on Dec 23, 2020 04:42 PM IST. For more news and updates on politics, world, sports, entertainment and lifestyle, log on to our website latestly.com).