Housefull 4's premiere on Television got a lot of love from the audience so much so that it is the most-watched one in 2019. 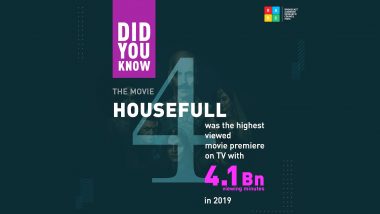 So what if the film was accused of fudging box office numbers to prove it was a huge hit, so what if many were horrified to hear some of the most offensive dialogues ever writer, Housefull 4 still enjoys patronage. As per BARC India, the TV premiere of the film recorded the highest viewership in 2019 which is 4.19 billion minutes. The movie is the most lucrative one in the franchise with over Rs 200 crore in its kitty if makers are to be believed. Housefull 4 Box Office: The Bizarre Case of Akshay Kumar’s Rs 200 Crore Grosser and the Muted Celebrations Over the Milestone!

Housefull 4 had the ensemble cast of Akshay Kumar, Riteish Deshmukh, Bobby Deol, Kirti Kharbanda, Kriti Sanon and Pooja Hegde along with series regular Chunky Panday and Ranjeet. It was supposed to mark the return of Sajid Khan to the franchise but a Me Too movement later, he is nowhere to be seen. The film was later directed by Farhad Samji.

Housefull 4 took viewership to the next level when it became the highest viewed movie premiere on TV in 2019!#BARCIndia #WhatIndiaWatches #Housefull4 #Movie #Television #WorldPremiere pic.twitter.com/kxrQwML1Gb

When Akshay Kumar was asked about the fudging numbers controversy, he told in an interview, "There is a studio called Fox Star Studios (involved with the film) it has a big credibility. It is a corporate. It runs from LA. It is not possible. We should use our brains. They make films of millions and millions of dollars and for them to increase by three or five nothing will happen. So, let's talk sense. They (Fox Star Studios) are writing it on their own (Twitter) handle and it goes everywhere, they have to report to everyone. Nobody is going to lie this." All this after saying this doesn't make a difference.

(The above story first appeared on LatestLY on May 20, 2020 02:36 PM IST. For more news and updates on politics, world, sports, entertainment and lifestyle, log on to our website latestly.com).