The fans of the Baaghi franchise and Tiger Shroff are, of course, going to love it. We...well, we did not enjoy Baaghi 3 as much as the ardent fans. So, this got us thinking. Which Baaghi movie did we enjoy the most? So, here we are...ranking all the three Baaghi movies ranked from worst to best. 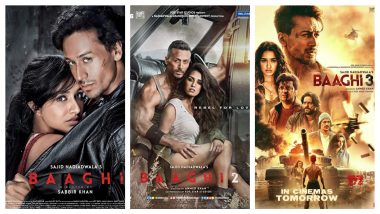 Baaghi 3 has opened in theatres. The movie is a spiritual successor in the Baaghi franchise featuring Tiger Shroff. The actor once again plays an action hero named, Ronny, in a very different setting than the previous two movies. Shraddha Kapoor has also returned to the franchise after skipping the second film. Ahmed Khan has directed the film. The fans of the franchise and the actors are, of course, going to love it. We...well, we did not enjoy Baaghi 3 as much as the ardent fans. Baaghi 3 Movie Review: Despite the Kabooms & Shraddha Kapoor’s Censored Abuses, Tiger Shroff’s Action Film Is D…Duh…Dull!

So, this got us thinking. Which Baaghi movie did we enjoy the most? So, here we are...ranking all the three Baaghi movies ranked from worst to best. Baaghi 3 Box Office Collection Day 1: Tiger Shroff's Film Fails To Beat Baaghi 2; Opens At 35% Occupancy.

Yes, Baaghi 3 is the worst entry in the franchise. Despite being set on a scale much larger than the previous two films, the movie fails to enter that fun territory. The action is cool to watch, but the usage of even two brain cells will make you cringe hard. Everything is disconnected from everything in this film. Characters literally disappear from the screen to be never seen again. Even the songs are not very memorable.

The second film is also the second-best in the franchise. The plot is cool. A little over the top and melodramatic, but somehow manages to work. The action sequences are better choreographed. Some dialogues are very memorable. Ahmed Khan directed the film.

Now, the first Baaghi is what made Tiger the action star we know him as today. The movie was high on action. Everything was done stylishly. The plot, despite the loopholes, was enjoyable, with a little suspension of disbelief. The action was novel and nicely choreographed. Despite being a weak film in totality, Baaghi was entertaining at least. The movie was directed by Sabbir Khan.

So, that was our ranking of the Baaghi movies in the franchise. Which one of the three Tiger Shroff films is your favourite? How will you rank these action films? Tell us in the comments below.

(The above story first appeared on LatestLY on Mar 06, 2020 04:17 PM IST. For more news and updates on politics, world, sports, entertainment and lifestyle, log on to our website latestly.com).