An Action Hero Review: Ayushmann Khurana and Jaideep Ahlawat's Film Is A Decent Watch As Per Critics 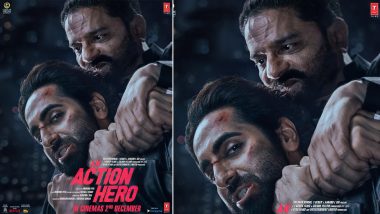 Helmed by Anirudh Iyer, An Action Hero released in theatres on December 2. Starring Ayushmann Khurana and Jaideep Ahlawat in main roles, the Bollywood movie had high expectations from it. Right from posters, teaser and trailer, the makers have tried their best to keep the audience glued. The premise of the film revolves around a hero who was once at the peak of his career, is now living in hiding. Just in case, you are wondering how's the film, here check out the review roundup of An Action Hero below. An Action Hero Movie Review: Ayushmann Khurrana & Jaideep Ahlawat's Cat-and-Mouse Chase Is Both Hilarious and Thrilling! (LatestLY Exclusive).

The Indian Express: "All well and good, but scat, we want the action heroes to only do what they do best: kick and chop their way through a throng of baddies. Those little moments when nothing much is going on slows down the proceedings, and prevents this one from being a total humdinger."

India Today: "If you are in the mood for some mindless action and wish to see Ayushmann perform car chases and action sequences for the first time (and the chiselled body), you may still give the film a shot. And all you Jaideep lovers, this man nails it, yet again. However, if you plan to book An Action Hero tickets thinking of it as yet another hatke Ayushmann film, we would ask you to pause and give it a second thought."Ayushmann Khurrana Sings 'Jehda Nasha' With Young Delhi Street Singer and It Will Bring a Smile to Your Face (Watch Video).

TOI: "Not everything in the plot adds up and you wish the film was tighter, but it does have a fair dose of action and comedy backed with good performances. The interesting thing about An Action Hero is not so much the story itself, but seeing Ayushmann Khurrana get into the skin of an action hero and flex his muscles (literally) on screen. For that, maybe, you can make a trip to the theatres."

So, after reading the above reviews, are you going for An Action Hero at the theatres near you? Tell us in the comment section below.

(The above story first appeared on LatestLY on Dec 02, 2022 12:43 PM IST. For more news and updates on politics, world, sports, entertainment and lifestyle, log on to our website latestly.com).