Ankita Lokhande has finally talked about her past relationship with Sushant Singh Rajput and how it came to an end. In the same interview, she also mentioned how she prioritised SSR over her career even if that meant letting go of big films. Check out the full story. 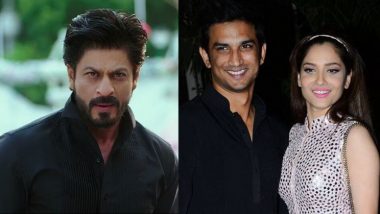 Ankita Lokhande has finally talked about her past relationship with Sushant Singh Rajput and how it came to an end. The Manikarnika actress and SSR dated each other for six years, before calling it splits in 2016. Having said that, she was the one who stood by Sushant's family and also urged for #JusticeForSSR. However, after the actor’s sudden death, she was mercilessly bashed by many for leaving Sushant. Now, in her recent interview with Bollywood Bubble, she revealed how she always prioritised her relationship with SSR, for which she even rejected many big films. Ankita Lokhande Makes Massive Revelation About Her Breakup With Sushant Singh Rajput, Says She Was Suicidal When He Left Her.

Speaking to the portal, she admitted giving up Shah Rukh Khan’s Happy New Year and also roles in Bajirao Mastani and Goliyon Ki Raasleela: Ram-Leela. “I gave up on many things. I gave up on Happy New Year. I remember Farah ma’am offered me the film and I met Shah Rukh sir also. He was like, ‘I will try to give you the best debut,” she said.

“And I was like, okay, but at the back of my mind… I was in Macau. Me, Sushant and Shah Rukh, we were sitting, and I was like, ‘Bhagwan, mera na ho (God, I hope I don’t get it).’ Ladki kaisi hoti hai na, she always tries, ‘Nahi yaar, mere partner ka achcha ho’ (A girl always wants the best for her partner), “ she added. Ankita Lokhande to Pay a Tribute to Sushant Singh Rajput With a Dance Performance on Neha Kakkar’s Song ‘Taaron Ke Shehar’.

In the same interview, she also expressed how she has zero regrets about not doing these films. She said, “Till today, I have no regrets. I was trying to build a man and I did that. I was trying to be very strong support for Sushant, and I did it. But then I realised, ‘No, yaar. Main bhi toh kuch hoon (I have my own identity too).’ After my break-up, I understood my value. It is very important to understand your worth.” Ankita Lokhande Remembers Sushant SIngh Rajput, Says 'Keep Smiling Wherever You Are' (View Post).

Ankita also went on to add that how Sanjay Leela Bhansali warned her that she would regret not taking up his movies. “I remember Sanjay sir called me and said, ‘Kar le Bajirao varna yaad rakh, pachtayegi tu (Do Bajirao Mastani or you will regret it later),” she said. The actress also dropped a massive statement by adding that SSR and she broke up because he chose career. Ankita and late actor Sushant had fallen in love with each other on the sets of Pavitra Rishta. Stay tuned!

(The above story first appeared on LatestLY on Mar 23, 2021 10:42 AM IST. For more news and updates on politics, world, sports, entertainment and lifestyle, log on to our website latestly.com).