Sushant Singh Rajput's ex-girlfriend Ankita Lokhande lit a diya in remembrance of him and wished for him to be happy wherever he is. 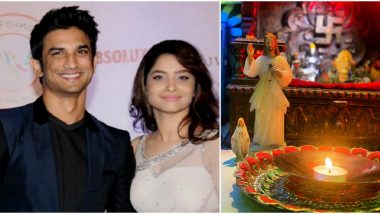 Its been more than a month that actor Sushant Singh Rajput left for heavenly abode on June 14. The actor died by suicide and was reportedly suffering from depression. While the entire nation and a lot of people from the entertainment world mourned his death, Ankita, who was in a relationship with Sushant for more than 6 years maintained a dignified silence on his death. In fact, Ankita's first post for SSR was on the eve of the actor's one month death anniversary where she put up a simple post. RIP Sushant Singh Rajput: Ankita Lokhande Remembers Late Actor a Month After His Demise, Lights a Lamp.

Ankita also did her part and in remembrance of her ex, she lit a diya placed next to a statue of Jesus and prayed for his happiness, wherever he is.

HOPE,PRAYERS AND STRENGTH !!! Keep smiling wherever you are😊

In other related news, Sushant Singh Rajput's last movie Dil Bechara will be releasing on July 24 on Disney+ Hotstar. The film's music album was released over the past few weeks and has left Sushant's fans totally emotional over this being the last time they will see Sushant on-screen. Only this afternoon, Dil Bechara's music composer AR Rahman, joined hands with other well-known musicians to give the last actor a musical tribute which left many teary-eyed. We miss you everyday Sushant!

(The above story first appeared on LatestLY on Jul 22, 2020 10:04 PM IST. For more news and updates on politics, world, sports, entertainment and lifestyle, log on to our website latestly.com).