Ankita Lokhande Makes Massive Revelation About Her Breakup With Sushant Singh Rajput, Says She Was Suicidal When He Left Her

She talked about how she was suicidal after he broke up with her. She added that she never spoke about all these details of the break up before as she did not want to make a ruckus out of it. 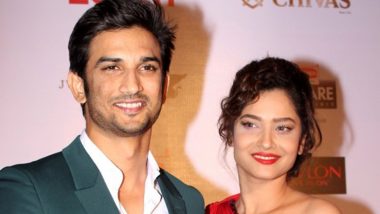 Late actor, Sushant Singh Rajput's demise was a shocking occurrence that we all are still recovering from. The actor's ex-girlfriend, AnkitaLokhande was also very much affected by this major loss. She openly spoke about the late actor and paid her tribute to him on social media with different posts as well. The actress was very close to Sushant and always urged the jurisdiction to find out the truth about his suicide and punish the people who were responsible for his death. Months later after his demise, Lokhande has now opened up about her equation with Sushant in detail. Ankita Lokhande to Pay a Tribute to Sushant Singh Rajput With a Dance Performance on Neha Kakkar’s Song ‘Taaron Ke Shehar’.

Ankita made some really shocking revelations about her relationship with Sushant. She talked about how she was suicidal after he broke up with her. She added that she never spoke about all these details of the break up before as she did not want to make a ruckus out of it. Talking to Bollywood Bubble, Ankita said, “Aaj log mujhko aakar bol rahe hai, ‘Tumne chhoda Sushant ko’ (Today, people are accusing me of having dumped Sushant). How do you know that? Nobody knows about my thing. Sushant…"

She went on to say, "I am not blaming anyone here… I think he made his choice very clear. He wanted to go on with his career. He chose his career and he moved on. But for two-and-a-half years, I was dealing with so many things. For me, it was very difficult but my family stood by me. My life was finished. I was just finished. I did not know what to do after that.

"I am not blaming anyone. He chose his way. I gave him the full right, ‘Chal, yeh teri zindagi hai (it’s your life), you can go on.’ But then, I was battling with something very badly and my family stood by me. I came out very strongly. Aapke dimaag mein cheezein aati hai uss time ki main kya karoon (You are plagued with negative thoughts). Maybe I wanted to finish myself. Woh thought process tab aapka hota hai (You do think of such things at that time) but then I came out of it.” Ankita Lokhande Remembers Sushant SIngh Rajput, Says 'Keep Smiling Wherever You Are'.

Ankita was previously trolled heavily in regards to the Sushant Singh Rajput suicide case. During a live session, she decided to give back to these trolls and said, "Sabki apni-apni motives hoti hai life mein (Everyone has different motives in life). Sushant always wanted to grow in his life and that is what he did. Woh chala gaya apne raaste. Uske liye main kahaan galat saabit hoti hoon? Mujhe kyun gaaliyaan di jaati hai? Maine kya galat kiya (He went his way. How am I to blame for that? Why am I being abused? What did I do wrong)? You don't know what is my story, so stop blaming me. It is really hurtful." Sushant passed away on June 14 last year.

(The above story first appeared on LatestLY on Mar 22, 2021 08:10 PM IST. For more news and updates on politics, world, sports, entertainment and lifestyle, log on to our website latestly.com).