Sharing a sneak-peek of her act, Ankita took to Instagram to share how difficult it would be for her to perform at an upcoming award show. "This time it's very different and difficult to perform." 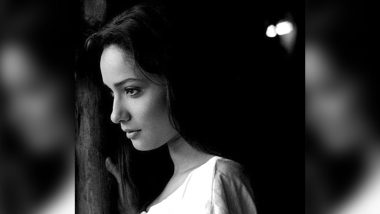 Actress Ankita Lokhande, who was heavily trolled by the fans of her former boyfriend and late Bollywood actor Sushant Singh Rajput last week, has shared that she would be paying tribute to the late star through a special dance performance. Ankita Lokhande Remembers Sushant SIngh Rajput, Says 'Keep Smiling Wherever You Are'

Sharing a sneak-peek of her act, Ankita took to Instagram to share how difficult it would be for her to perform at an upcoming award show. "This time it's very different and difficult to perform. From me to you. it's painful," she wrote with the video.

In the video, she is seen rehearsing to the tunes of Neha Kakkar-Sunny Kaushal's latest hit "Taaron ke shehar". Did Ankita Lokhande Show Her Support To Sushant Singh Rajput's Father For Filing FIR Against Rhea Chakraborty in Her Cryptic Post?

Ankita often took to social media to lend support to the family of her late boyfriend Sushant, who was found dead in June this year. However, last week, many fans of the late actor found reasons to troll Ankita. They have alleged that Ankita had moved on in life and is no longer interested in justice for Sushant.

Ankita doesn't seem to be affected by the negative comments as she has been sharing more happy photos of her on Instagram. One user commented, "Tum roz pix upload karo, hum roz tumko Sushant ki yaad dilayenge #shame (you upload new photos every day and we will remind you of Sushant every day)."

Ankita captioned her latest pic, "I may not be perfect but I'm always me." Apart from this, the investigation into Sushant's death is still on.

(The above story first appeared on LatestLY on Nov 29, 2020 05:56 PM IST. For more news and updates on politics, world, sports, entertainment and lifestyle, log on to our website latestly.com).