Indian skipper Virat Kohli and actor-producer Anushka Sharma are now proud parents to a baby girl. The said news was shared by the cricketer on social media. However, a certain section of fans have been churning funny memes and jokes fetauring Taimur Ali Khan and it's a must-see. Do not miss it. 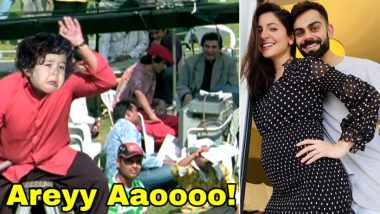 Indian skipper Virat Kohli and actor-producer Anushka Sharma are now proud parents to a baby girl. The said news was shared by the cricketer on social media. Upon the arrival of the little munchkin, fans, as well as celebs poured love for the coupe online. However, then there's a certain section of netizens who are busy churning some hilarious memes featuring Taimur Ali Khan. You may ask why Tim? As the makers of the meme want to prove that Kareena Kapoor and Saif Ali Khan's son popularity is in danger after Virushka's baby news. Anushka Sharma-Virat Kohli Blessed With a Baby Girl! Madhuri Dixit, Riteish Deshmukh and Others Shower Love on the Little Angel’s Arrival.

For the one's unaware, it's Taimur, who has been shutterbugs favourite since quite a long time. Having said that, as the cricketer-actress jodi has been blessed with a baby girl on January 11, 2021, the internet is flooded with Taimur's funny jokes and memes. If you remember, the same scenario was seen online when Anushka-Virat had announced that they are expecting their first child. Here, check out the latest jokes below. Anushka Sharma And Virat Kohli Blessed With Baby Girl! Virushka Fans Share Congratulatory Posts On The Arrival Of Couple’s First Child.

Taimur trying to get attention of Reporters after Baby Kohli's news : pic.twitter.com/MpNCmFECSA

Meanwhile.. taimur, with whom nora fatehi wants to marry : pic.twitter.com/W9DiTfyPIT

So, which meme from the above is your favourite? Having said that, it was in August 2020, when Anushka-Virat had made it public that the former is preggers with a cute post. The two have been married since 2017 and are considered to be a power couple in the business. Congratulations to the two. Stay tuned!

(The above story first appeared on LatestLY on Jan 11, 2021 09:05 PM IST. For more news and updates on politics, world, sports, entertainment and lifestyle, log on to our website latestly.com).