Bhool Bhulaiyaa 2: Kartik Aaryan Was Trained for a Week to Ace the Tandav Moves in the Horror-Comedy

With Bhool Bhulaiyaa 2 now out, Kartik has a lineup of massive films ahead too including, Shehzada, Captain India, Freddy and Sajid Nadiadwala's untitled next. 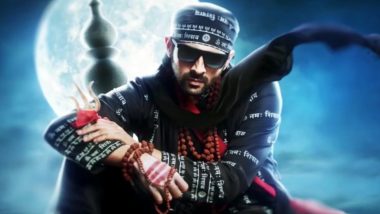 With Bhool Bhulaiyaa 2 garnering an opening day collection of 14.11 crore, Kartik Aaryan's stock is running high in Bollywood, beating all recent Hindi releases since Sooryavanshi. And the movie climax is expected to keep the collections going strong in the days ahead. Bhool Bhulaiyaa 2 Movie Review: A Kartik Aaryan Show Trapped in a Spooky Comedy That's Neither Amuses Nor Scares! (LatestLY Exclusive).

The second half of the film has been especially garnering a lot of praises from fans and reviewers for the way Kartik Aaryan has performed a particular scene where he does the Tandav dance. While people are familiar with the young star's dancing skills, his Tandav performance depicts another dimension of his talents.

As per a source, "Kartik trained non-stop for an entire week to nail that small dance sequence where he performs Tandav. It is a very difficult dance form for someone who has never learnt Indian classical dance and he managed to grab it and how within a week's training under Guru Chinni Prakash." Bhool Bhulaiyaa 2 Box Office Collection Day 2: Kartik Aaryan’s Horror-Comedy Stands At A Total Of Rs 32.45 Crore!

Kartik Aaryan is riding high on delivering the biggest opener of the year with this film's day one collections overtaking films like Sanjay Leela Bhansali's Gangubai Kathiawadi and Yash Raj Films' production Jayeshbhai Jordaar starring Ranveer Singh. With Bhool Bhulaiyaa 2 now out, Kartik has a lineup of massive films ahead too including, Shehzada, Captain India, Freddy and Sajid Nadiadwala's untitled next.

(The above story first appeared on LatestLY on May 22, 2022 06:52 PM IST. For more news and updates on politics, world, sports, entertainment and lifestyle, log on to our website latestly.com).