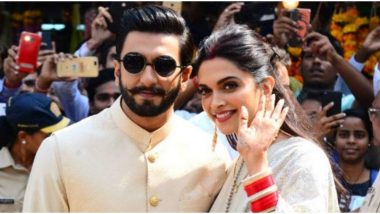 Deepika Padukone is among the big names who received a summons by NCB following her connection with their drug probe. The actress along with other popular names like Sara Ali Khan, Rakul Preet Singh and Shraddha Kapoor were called in by NCB for questioning and the same is scheduled on September 25 and 26th. DP who was earlier shooting for Shakun Batra's next in Goa landed in Mumbai on the evening of September 24th. She's slated to meet the officials on either Friday or Saturday and while we heard reports of him being insistent on joining her during the interrogation, NCB has denied getting any such requests.

As per initial reports in PeepingMoon.com, Ranveer had apparently written a letter to NCB asking if they can allow him to remain present during Deepika's questioning. Ranveer feared his wife will have panic attacks during her interaction and wanted to be by her side just in case. The actor was also believed to have added that he is a law-abiding citizen. He knows he can’t be present at the time of Deepika's questioning but is understood to have requested that he be allowed inside the office for his wife's sake. However, a recent update suggests that NCB never received any such request by the actor. Bollywood Drug Probe: Deepika Padukone to Join NCB Investigation On September 25.

Besides Deepika, Sara Ali Khan who was in Goa with her mother and brother has also returned to Mumbai. She was among the few names who came under NCB's scanner while they were investigating this drug angle in Sushant Singh Rajput's death case. Along with NCB, CBI and ED are other major agencies involved in the actor's death case.

(The above story first appeared on LatestLY on Sep 25, 2020 09:47 AM IST. For more news and updates on politics, world, sports, entertainment and lifestyle, log on to our website latestly.com).