The new song from Chhalaang, Teri Choriyan is a lovely track with Guru Randhawa and Payal Dev on the mic. Rajkummar Rao and Nushrratt Bharuccha's chemistry looks extremely fresh here. 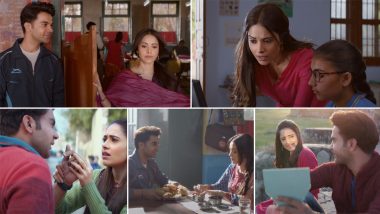 Chhalaang is one of those close to roots movies that will be streaming on Amazon Prime Video from November 13. Rajkummar Rao plays a sports teacher who falls for one of the female teachers played by Nushrratt Bharuccha. Their chemistry seemed really sweet in the trailer of the film and now the song Teri Choriyan makes us believe they will look really good together. There is a certain sweetness to the visuals in the songs which get accentuated by Guru Randhawa's voice. It can soon become the love anthem as it simply sounded and composed. Chhalaang Trailer: Rajkummar Rao, Nushrratt Bharuccha, Mohammed Zeeshan Ayyub's Social Comedy From Heartlands of India Looks Endearing (Watch Video)

The lyrics are written by Luv Ranjan and composed by VEE. The film is produced by Ajay Devgn, Luv Ranjan and Ankur Garg, and presented by Bhushan Kumar and is directed by Hansal Mehta.

Chhalaang is just another movie that skipped the theatre way due to COVID-19 to release on an OTT. This year has been a great boost to digital platforms with big movies releasing on the platforms. It was supposed to be a reality in the future but the pandemic made it a reality sooner than people expected.

(The above story first appeared on LatestLY on Oct 28, 2020 02:21 PM IST. For more news and updates on politics, world, sports, entertainment and lifestyle, log on to our website latestly.com).