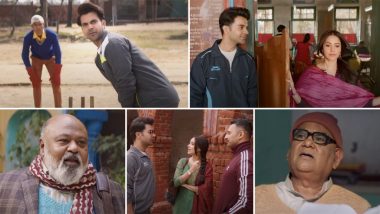 The first trailer for the upcoming film, Chhalaang, has dropped online. The sports dramedy stars Rajkummar Rao, Nushrratt Bharuccha and Mohammed Zeeshan Ayyub in key roles. Set in the heartlands of India, the storey is about lazy PT teacher who has to do what his job entails to win his job and to impress the love of his life. It's convoluted but looks endearing on the screen. Such is Hansal Mehta's direction - he has a way of making complex most emotions look palpable. Coolie No 1, Chhalaang, Durgavati: Here Are The 9 Films All Set To Release On Amazon Prime Video!

The movie is written by Luv Ranjan (Sonu Ke Titu Ki Sweety), Aseem Arrora (Malang) and Zeishan Quadri (Gangs of Wasseypur) who all have major blockbusters to their credit. The movie is co-produced by Ajay Devgn with Luv and Ankur Garg.

"Naukri pyari hai par izzat thodi zyada pyaari hai," Rajkummar says in the trailer at the brim of being fired from his job by Ila Arun, who is a delight to watch on the screen. The dialogue begs the question that if the man loved his job so much why didn't he do it right in the first place. Well, that's something we will find out when the movie releases.

Also, can we take a moment to point out that Nushrat Bharucha has altered her spelling to Nushrratt Bharuccha? Why? 10 Years of Love, Sex Aur Dhokha: Nushrat Bharucha Shares How It Is Working Again with Her Chhalaang Co-Star Rajkummar Rao After a Decade.

Watch The Trailer For Chhalaang Here:

Chhalaang is yet another film that had to skip a theatrical release amid the COVID-19 pandemic. The movie will stream on Amazon Prime from November 13. It's coming out on OTT at the time when some theatres across the country are reopening. But, maybe like Shakuntala Devi and Gulabo Sitabo, the movie will also reap the benefits of releasing online.

(The above story first appeared on LatestLY on Oct 17, 2020 08:00 PM IST. For more news and updates on politics, world, sports, entertainment and lifestyle, log on to our website latestly.com).