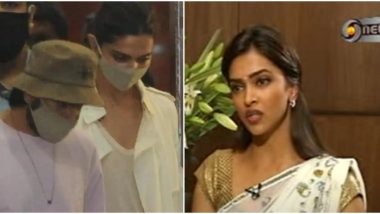 Deepika Padukone is making the headlines, along with Sara Ali Khan, Rakul Preet and Shraddha Kapoor, after Narcotics Control Bureau (NCM) served them summons. They were called to the NCB office in Mumbai to investigate drug usage in Bollywood, after their names cropped up during investigations related to Sushant Singh Rajput's death. The questioning of the actresses is happening on September 25, the same day as farmers all over India have gone on a nation-wide strike. Bollywood Drug Probe: NCB Denies Getting Request From Ranveer Singh to Accompany Deepika Padukone During Questioning.

Social media is flooded with any and every update from Deepika's travel plans to videos of news channels following her car. At the same time, an old interview of hers is going viral. The reason this old clip is going viral on Twitter is that in the video she is praising Rahul Gandhi as a youth politician. So Tweeple are wondering if that's the reason why NCB is bothering her.

Check out the viral video clip below:

The real reason why Deepika Padukone is being hounded by the NCB ⬇️ How dare she wish Rahul Gandhi be the PM 🤓 pic.twitter.com/wBXuBw3t2y

You can watch the whole interview below:

So do you think Deepika Padukone has been dragged in the Bollywood drugs controversy over her stand on JNU or her support to the Congress politician? Or do you believe she is genuinely guilty? Share your thoughts in the comments section below. Or better, just wait for the whole probe to get over!

(The above story first appeared on LatestLY on Sep 25, 2020 05:45 PM IST. For more news and updates on politics, world, sports, entertainment and lifestyle, log on to our website latestly.com).