Devoleena Bhattacharjee talks about how working with Renuka Shahane was a dream and how she had a fan-girl moment on sets of their forthcoming short, First Second Chance. Devoleena also recalled being a big fan of her as a kid and dancing to the classic song, "Lo Chali Mein" from Hum Aapke Hai Kaun. 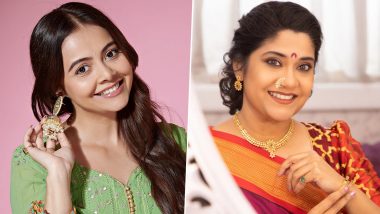 Actress Devoleena Bhattacharjee says that from the time she started acting, she had a dream of working with veteran actress Renuka Shahane, and with their upcoming short First Second Chance, her wish has been fulfilled. Renuka Shahane: Always Nurtured the Dream of Directing Madhuri Dixit.

The story of First Second Chance is about two lovers -- Vaidehi (Renuka Shahane) and Raman (Ananth Mahadevan) -- who parted ways in their younger days and how life unites them in their old age again. In the film, Devoleen plays the younger version of Vaidehi.

Talking about working with Renuka, Devoleena told IANS : "Working with Renuka ji was on my bucket list from the time I started acting. Obviously, like all the 90's kids, I also danced on "Lo Chali Mein" from Hum Aapke Hai Kaun. So the moment I got to know that she is the lead in the film, I was like, no matter what my character is, I am on! It is my good luck that my character is substantial in the narrative. But on the sets, I had a fan-girl moment morre than co-actor." Devoleena Bhattacharjee and Vishal Singh 'Not Engaged', Here's the Truth Behind the Rings Exchanged.

"It is also true that at times instead of acting classes, watching such veteran actors perform before your eyes teaches you so much. The same thing happened to me during the shooting of our film. The way Renuka ji moved on the sets, delivering the dialogues, expressing emotions... I observed them all and imbibed everything possible," shared the young actress. First Second Chance, which also features Ananth Mahadevan, Nikhil Sangha and Saahil Uppal, releases on Disney + Hotstar on June 5.

(The above story first appeared on LatestLY on Jun 02, 2022 08:38 PM IST. For more news and updates on politics, world, sports, entertainment and lifestyle, log on to our website latestly.com).